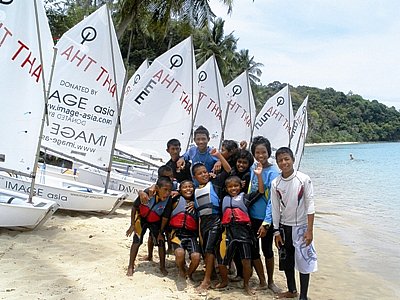 PHUKET: The Phuket Youth Sailing Squadron (PYSS) is preparing to enter the Hua Hin Regatta 2011, and are inviting youths aged seven and up, specifically underprivileged children, to sign up for this new club that promotes youth sailing in Phuket.

Five new youngsters have recently joined the sailing program, so there are now more than 20 members. Seventeen of these children live at the Phuket Sunshine Village Foundation residence in Koh Kaew.

Since it started in 2010, the PYSS has competed in several regattas in Thailand. The youngsters are now in training for the next Optimist Championship, the Hua Hin Regatta 2011. The squadron is hoping to raise enough funds to give eight young Phuket sailors the opportunity to compete in this prestigious event.

The Hua Hin Regatta is an annual sailing event that has been organized since the year 2000 in honor of His Majesty King Bhumiphol Adulyadej who excels in sailing sportsmanship in Thailand. This year’s regatta will celebrate H.M. the King’s 84th birthday anniversary. Sailors will compete for several Royal Trophies, namely:

Super Mod National Championship trophy from His Majesty the King

OK dinghy National Championship trophy from Her Majesty the Queen

Support youth sailing on Phuket and sponsor a sailor or an event. For further information on sponsorship packages visit www.phuketyouthsailing.org or contact Katy at 085-215 9185.

Love for the game of tennis