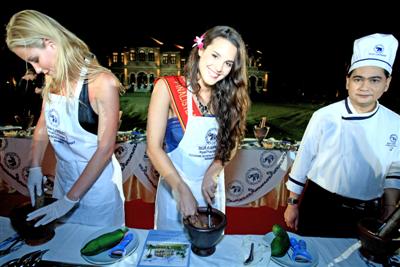 The class, conducted by celebrity chef Nooror Somany-Steppe, was held at the Chin Pracha Mansion in Phuket Town, where the Blue Elephant Phuket will soon open its doors as a royal Thai cusine restaurant and cooking school.

The dish they were taught to make was none other than the Isarn staple somtam, or spicy papaya salad.

The dish is sometimes referred to affectionately by the Thais as ‘papaya pok-pok’ after a hit pop song by the same name.

Given the fiery nature of somtam, most of the beauties donned rubber gloves throughout the preparation process, which involves smashing ingredients with a mortar and pestle.

The Belgian beauties are in Phuket for eight days, staying at the Cape Panwa Hotel and Spa.

Their visit is by invitation of the Tourism Authority of Thailand, which hopes to attract more Belgian tourists to the country.

A number of past Miss Belgium winners visited Phuket back in 2005 to help raise funds for a tsunami relief charity.