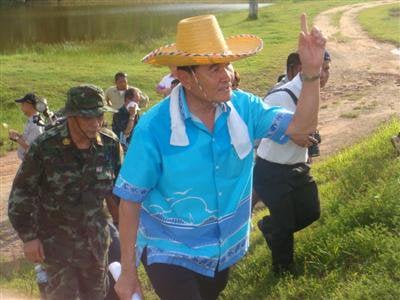 PHUKET CITY: Phuket Governor Wichai Phraisa-ngop on Thursday set off on an extensive walking tour of the strip of land he would like to see become the island’s second north-south road artery.

The first day of the tour started off on the bypass road, opposite the newly-opened Premium Outlet Mall, and proceeded all the way past the British International School, a distance of about six kilometers.

If completed, the road would run a distance of 21 kilometers along the same path as high-tension wire pylons, parallel to Thepkrasattri Rd.

Gov Wichai intends to walk the entire distance. He covered several more kilometers yesterday and will continue the hilly trek on Monday.

The majority of the land needed for the project is administered by the Electricity Generating Authority of Thailand (EGAT), but the proposed route also cuts though about 200 plots of private land, most of it in Thalang.

Some landowners, including businesses that stand to benefit from the new road, have voluntarily donated land for the project.

Some others, including those who have built homes and have no place else to go, are holding out.

Gov Wichai said there was a generally positive response to the project from local residents and landowners at the first public hearing over the project.

On Thursday Thanachart Capital Public Company representative Decha Rakmitr met with Gov Wichai to discuss the possibility of donating land held by the finance firm for the project.

“Our board has no problem donating company land for this new road, but we need to see an official written request confirming the details of the 12 rai needed,” he said.