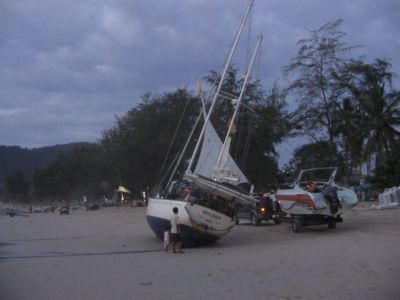 PATONG: Strenuous efforts by about 50 volunteers at high tide this morning failed to push the stranded 38-foot sailboat Sultan off Patong Beach. The boat’s cash-strapped British owner will now seek financial assistance from his embassy in an effort to re-float the vessel, which has drawn considerable attention from tourists visiting the beach.

Sultan washed up on the south end of Patong Beach, near the bridge to Amari Coral Beach Hotel, during a strong storm about 1 am on Monday.

Skipper Michael Wilson, who was asleep on the fiberglass vessel when it hit the shore, told the Gazette he had anchored off Patong after having reached Phuket after an exhausting 17-day solo sail across the stormy Indian Ocean from Sri Lanka.

About 50 people, both Thais and foreigners, braved large waves and strong onshore wind in an effort to push the boat back out to sea about 2 am this morning, but without success.

Pol Sgt Payong Chitsombat of the Tourist Police office in Patong today told the Gazette that he accompanied Patong Deputy Mayor Chairat Sukkaban to the beach last night to oversee the effort, which was unsuccessful because the yacht’s hull had become buried too deep in the sand.

“I don’t think manpower alone can move it now, no matter how big and strong the volunteers are. I recommended that he rent equipment, such as a backhoe or large boat, but he told me he didn’t have any money,” Sgt Payong said.

Mr Wilson, who earlier said he thought his anchor line had been cut, seemed to think the local authorities would provide the needed assistance. He is afraid the longer the 35-year-old boat remains on the beach the more damaged it will become.

He said he would try to get financial assistance from the British Embassy.

Another alternative strategy he mentioned was using elephants to dislodge the vessel.

The police say they are doing what they can to help.

“We brought him some food and continue to help him as much as we can, but unlike in his country this is something that has to be carried out through coordination with the private sector,” Sgt Payong said.

In the meantime, the stricken vessel has become Patong’s hottest new tourist attraction, with scores of tourists posing to have their pictures taken while standing next to it.