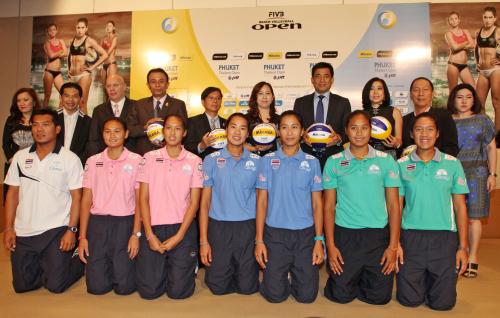 PHUKET: The 2013 FIVB Beach Volleyball World Tour will make its penultimate stop at Karon Beach, Phuket at the end of October. This will be the 8th successive year that Thailand has staged an Open series women’s event on the FIVB calendar.

The US$110,000 Phuket Thailand Open powered by PTT, which is organized by Pentangle Promotions Co., Ltd and the Thailand Volleyball Association will be held from October 29 – November 3 2013.

The Phuket Thailand Open is the biggest annual beach sporting event in South East Asia and Thai beach volleyball fans will be able to watch over 50 of the world’s top women beach volleyball teams in action on Karon beach. Admission to the tournament is free.

Entries for the tournament close at the end of September and to date 42 teams from 21 countries have already committed to the tournament. Countries who have entered are: Argentina, Australia, Austria, Canada, Columbia, Czech Republic, England, Finland, France, Germany, Greece, Italy, Japan, Kazakhstan, Paraguay, Spain, Switzerland, Sweden, Vanuatu, Venezuela and Thailand.

Thailand as host country is allowed two automatic slots in the main draw, with an addition slot available for a wild card entry. The Phuket Thailand Open powered by PTT is played over six days of competition with the qualifying rounds played on Tuesday 29 October, followed by two days on pool play between the main draw on 30 -31 October.

The final three days of the tournament are played using a single elimination format, with the semi-finals being played on Saturday November 2 and the finals on Sunday November 3.

The semi-finals on Saturday November 2 and the finals on Sunday November 3 will be broadcast on TV in Thailand and internationally to over 700,000,000 households worldwide.

Supporting the main beach volleyball tournament are a number of activities including the PTT Schools Cup and PTT Beach Volleyball camps on the finals weekend and a large sponsor activity zone featuring sponsor booths, a beer garden and games and competitions for beach volleyball fans.

Admission to the tournament is free throughout the week.

The 2013 FIVB Beach Volleyball World Tour Phuket is proudly sponsored by the Phuket Gazette, PGTV and the nationally televised ‘Phuket Today’ show on True Visions. ‘Phuket Today’, co-produced by PGTV and MCOT World, will be covering this event. The weekly half-hour show runs eight times a week, every week, on channels 99 and 58.

Keep checking the Phuket Gazette’s sports pages, join our Facebook fan page or follow us on Twitter @PhuketGazette for the latest local, national and international sporting news and action.

Phuket Special Report: One fateful night at the Longhorn Saloon