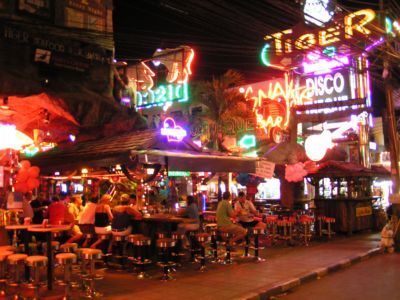 PHUKET: Entertainment venues around the island were raided last week in a clampdown on copyright violations. Several bar operators were fined for illegally playing copyrighted music in their bars and ordered to obtain licenses to allow them to play music at their establishments.

The raids were instigated by a team of about 20 representatives from RPK Publishing. Music collections and computers at venues were searched for evidence of copyright violations.

Some bar owners were ordered to pay fines or given the option to buy a license, while others were arrested and taken to police stations.

On condition of anonymity, several Rawai bar owners told the Gazette that the amounts they were fined varied depending on various factors, including negotiation skills. Some bars were tipped off about the raids and managed to hide their computers before being searched.

According to bar owners’ reports, that RPK representatives initially visited venues without police being present and later called police when they discovered that their clients’ music was being played illegally.

Police then accompanied the RPK representatives on subsequent raids at other venues.

When the Gazette called Samarn Chainarong, superintendent of Chalong Police Station, on Monday, he said he knew very little about the crackdown and was unable to say who bar owners should contact in order to obtain a license.

Many of the bar owners who had bought official-looking licenses issued by RPK Publishing following the raids told the Gazette they were unaware that those licenses applied only to the artists that RPK represents.

Sutthisak Prasatkrarukarn, Secretary of the Prevention and Suppression of Intellectual Property Infringement Committee (Private Sector), explained that people who buy CDs legally are entitled to use them for private entertainment.

“If the CD is to be used in a pub or restaurant, then one must ask the copyright owner – that is, the company that produced the CDs or their representative – for the right to use the CD in public,” he said.

An RPK employee at the company’s head office in Bangkok explained that RPK was trying to be reasonable. The official fine is anywhere from 40,000 to 200,000 baht. However, she added, in practice many bars escaped the fines by agreeing to buy a 12-month license to make public playing of the music legal.

One bar owner who was arrested, however, had to pay several thousand baht extra so that she could be released from detention and return to her restaurant.

RPK employee Khun Sayan, who led the raids, told the Gazette, “5,000 baht buys a license to play the music of our clients publicly for one year. Our staff are music experts and familiar with all the songs that the company is protecting.

“A lot of pubs, bars and clubs use music that we are supposed to protect. Karaoke bars, however, usually do not have the kind of music that we look after.”

The RPK employee in Bangkok explained that although there are presently 15 agencies in Thailand that sell copyright licenses on behalf of copyright holders, only five are actively pursuing violators.

The other four that are expected to visit Phuket soon are copyright agents Likisit Center and Likisit Pleng and the recording companies GMM Grammy and RS Promotions, who carry out their own inspections.

Khun Sutthisak explained that to fully comply with intellectual property laws, bar owners must obtain individual licenses to cover all the music they play.

He added that fines are much higher for establishments that broadcast unlicensed videos, adding that it is illegal for VCDs or DVDs to be copied onto a hard disk to be broadcast in entertainment venues. Violators face being fined from 100,000 to 500,000 baht for doing so.