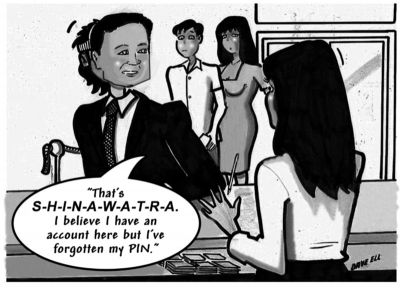 PHUKET OPINION: Two recent fraud cases, and a third one currently under investigation by this newspaper, highlight the continuing need for personal vigilance in protecting funds deposited in local banks.

The ruse was simple. Neglecting to return Mr Siriphat’s card after a transaction, Sarayut Yunu passed it to a friend, who used it to buy the 16,000-baht notebook at the same store’s electronics counter.

A simple yet crucial safeguard – the signature check – was neglected.

This will come as no surprise to anyone who regularly uses a debit or credit card in Phuket or elsewhere in Thailand, where even a cursory glance at the card signature is a rarity. Mr Sarayut’s young accomplice, Sarina Doloh, knew there was no need to even forge the victim’s signature, signing the receipt with a made up name.

Until the chip-and-pin system is adopted universally, better training of counter staff is a necessity.

Two weeks ago, the Gazette reported the case of Frenchman Claude Prigent, a Phuket resident who fell victim to an audacious fraud by another man also bearing the name Claude Prigent.

The ‘offending’ Claude Prigent walked into the victim’s bank and asked for a new ATM card and bank book. He received both, and went on to spend at least 164,000 baht of his namesake’s money in a spree in Phuket, Pattaya and the Philippines.

The bank has since refunded the victim’s money, but the inconvenience caused the innocent depositor was considerable.

The bank’s employees made several mistakes along the way.

When the ‘bad’ Claude Prigent walked into a bank branch on Koh Chang, an employee there told him there was already an account in his name. Thurdsak Chusak, a vice president at the bank, suspects Prigent tricked the employee into giving out the location of the account branch and the amount of money in the account.

A simple check of the man’s passport number would have told the bank clerk that this man had no right to such information.

The fraudster was then able to walk into the victim’s branch in Phuket (Chalong) and walk out with an ATM card for the account.

Again, an inspection of the man’s passport would have prevented the trouble that followed.

Nevertheless, it’s worth pointing out that it took the swindler about two months to spend Mr Prigent’s savings.

Had the victim paid more attention to his dwindling bank balance, the alarm could have been raised on the errant Claude Prigent before he made it out of Thailand, to Manila.

The lesson learned in both cases? A little personal vigilance can go a long way.