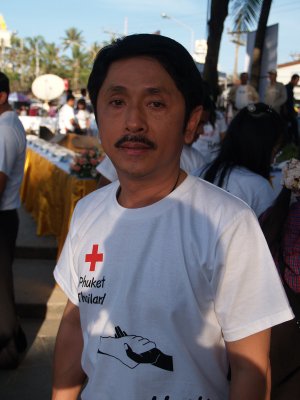 PATONG, PHUKET: A transsexual supermarket cashier was arrested in Phuket for stealing the chief of Kathu District’s credit card and using it to buy a notebook computer.

Miss Sarina used it to buy a 15,990-baht notebook at the store’s electronics counter.

Unaware of what was happening, Mr Siriphat headed to Thalang to rehearse for his role as a Burmese prince in last week’s Thalang Light and Sound battle reenactments.

KTC Bank called Mr Siriphat to check if he had made the purchase around 8:40pm.

“Then I remembered the cashier hadn’t returned my card that day,” he said.

Mr Siriphat immediately called the superintendent of Kathu Police, Col Arayapan Pukbuakao, who sent officers to the store to investigate.

At the store they found the notebook transaction receipt with Mr Siriphat’s card number on it. The slip had been signed with the name “Mali”.

The officers took Mr Sarayut to the resort where his younger friend worked.

As soon as the group arrived, the resort security guard presented Mr Sarayut with the notebook computer, saying Miss Sarina had left it for him.

At this point, Mr Sarayut confessed all.

Mr Sarayut and Miss Sarina have been charged with conspiring to use another person’s bank card without permission.

Mr Siriphat said, “I want cashiers to be more careful with credit cards. The cashier [at the electronics counter] didn’t check the signature.”

Col Arayapan worried about the effect the scam could have had on tourism. “If this happened to a tourist and they went home, what could we do?” he said.