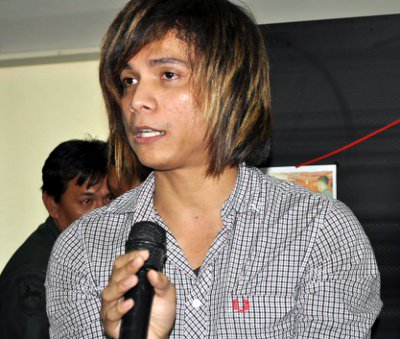 PHUKET: The brazen thief who made off with an estimated 6 million baht in cash and gold jewelry from a Phuket shop in June last year was arrested in Bangkok on Thursday.

He was then presented at the Region 8 police station by Provincial Police Region 8 Commissioner Santi Pensute.

“After the suspect robbed the Thanet gold shop on June 4 last year, we launched an investigation and discovered he was living in an apartment in Bangkok,” Lt Gen Santi said.

In the apartment the police found gold valued at about 365,00 baht, a .38 handgun and six bullets, as well as the glasses, hat and clothes the suspect had worn during the robberies, said Lt Gen Santi.

He would pick gold shops with poor security measures and that were near intersections, because it was easier to get away, Lt Gen Santi said.

“The second time was March 25, 2010. It was Charoen Manee gold shop at the entrance of Lard Pla Kao in Bang Khen, Bangkok. From that one I got about 1.7mn baht in gold.

“The third time was in September of the same year. It was Wang Thong gold shop and I stole about 1mn baht in gold. During that robbery I snatched the .38 gun from the shopkeeper and accidentally shot him.

“The last place I robbed was Thong Thanet gold shop in Phuket. Where I stole about 6mn baht in cash and gold,” he said.

Mr Krittasak said that he sold the gold to a shop in the Rungsit area.

He then told police that he had spent the money on “luxury living”, his condo, a car, electronics and a Patek Philippe watch worth 200,000 baht.

“I’m not drinking, smoking or using drugs. I spent most of the money on stuff and travelling around Thailand,” he explained.

“I am sorry for what I have done and didn’t mean to harm anyone. The only reason the shopkeeper was injured was because the gun fired by itself,” he said.

“I knew I would eventually be caught,” he confessed.

Mr Krittasak postured his hands with a wai and apologized to the Pet Suwan and Thanet gold shop owners when they came to identify him.

“If I had a chance to enter the Buddhist monkhood, I wouldn’t leave it,” he added.

To congratulate the investigation team on their good work the Thong Thanet gold shop owners gave the 100,000 baht reward to them.