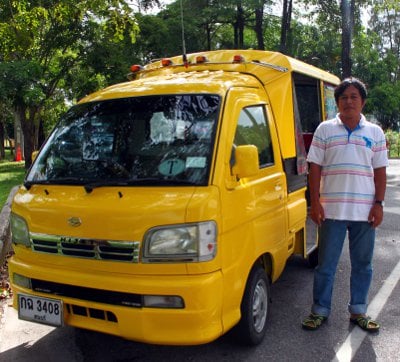 PHUKET: Groups of tuk-tuk and taxi operators in Phuket blame “unfair regulations” as the underlying cause of most problems faced by tourists who use Phuket’s public transport services.

The accusations were made during a meeting of senior government officials, including Government Spokesperson Prompong Nopparit, at Phuket Provincial Hall on April 27.

He blamed the illegal operators for the horror stories of tuk-tuk drivers accosting, attacking and ripping off tourists.

“I guarantee that they were not any members of our network. All our tuk-tuks are legal and I always check on the actions of our members,” he said.

To redress the problems, Mr Darun called on Mr Prompong and other relevant officials to listen seriously to the concerns voiced by all tuk-tuk and taxi drivers in Phuket.

This was the only way to solve the transport problems that had been plaguing Phuket for more than a decade, he said.

Mr Darun said of more than 1,000 tuk-tuks in Phuket, 600 were designed to be boarded from the side and all are members of his network. Another 400, which board from the rear, are individually owned.

Nui Kawiset, of the 300-member strong Samakkee tuk-tuk cooperative formed in 2009, said this regulation affected 70 side-entry tuk-tuks in that co-op that were brought in from other provinces.

“We applied for all these vehicles to be registered as tuk-tuks after the new rule was introduced. It costs too much – about 100,000 baht per vehicle – to convert them. So we have to rent tuk-tuks from other operators at 500 baht a day, or 15,000 baht a month,” he said.
CONCESSION DEPRESSION

Nikom Panmee, representing one of the cooperatives that has a concession to operate 180 limousines at Phuket International Airport, blamed the contract with airport operator Airports of Thailand (AOT), a public organization, for being too costly to his members.

“We have served the airport for a long time, but the contract is not fair. Our current concession, which we signed in 2009, lasts three years. In the second year our payments to AOT increased by 10%, and again by 10% in the third year,” he said.

“During the last year of the contract we have to pay 1.7 million baht monthly to AOT. We have asked the airport to reduce the concession fee since 1970. We have also complained to the government and its relevant departments, such as the Ministry of Transport, but we have never received a response.

“The current concession expires on June 30 this year. We don’t know how much the fee will increase after then – that’s up to AOT,” Mr Nikom said.

One airport limousine representative said the high concession fee of 1.4mn baht a month for the co-op he represented boiled down to 13,000 baht being required from each of the 220 vehicles within his co-op.

“We have calculated our expenses. We cannot live on this anymore,” said Mr Nikom.

His organization was well aware of the illegal “black plate” taxis serving passengers at the airport who pay no fees whatsoever, he said.

“We can accept that, but the airport needs to reduce our fee,” he said, adding that if it does not a protest might be inevitable.

“We have been trying to do everything possible to negotiate a more equitable fee, but without success. So if needed, come June 30, as a last resort we will do [what we need to do] by taking our people to force the airport,” Mr Nikom warned.

Pom Sukkasem, “president” of a group of taxi drivers who operate out of Central Festival Phuket, said, “We have 179 cars with ‘black plates’ [standard cars being illegally operated as taxis] and our alliance with other operators brings the total number of cars [that he represents] to more than 500.

“I”m attending the meeting because I would like to know if there are any policies to solve our problem,” he said.

Simply ridding the island of an estimated 10,000 “black plate” taxi operators would affect thousands of families, up to about 50,000 people in total, who rely on that income, he said.

His organization has fare rates plainly marked on boards for passengers to see before hiring the vehicle, Mr Pom explained.

“And we always stick to the fare, even after midnight. We have not received any complaints for eight years,” he said.
SPREAD THE WEALTH

“Standard fare rates need to be set for the whole island, and each group of drivers must be involved in setting these fares,” said Mr Paiboon

Premium fare rates for travel after midnight would need to be considered, he said.

“The airport also needs to reduce its concession fees, because they are too high and drive up the cost of everything. They are making more than 100 million baht a year and their staff get nine-month bonuses,” Mr Paiboon added.

“Second, Phuket has many taxi groups – both legal and illegal. We will look at what they need,” he added.

“Reports of taxi drivers assaulting tourists is ruining our tourism image. I left Phuket 11 years ago. Since my return, the problem seems to have worsened. Foreign investors always ask me about this problem and when it will be fixed,” Vice Governor Chamroen said.

“Our priority is to have the various groups of taxi driver identify their problems and send representatives to discuss them. Then we can work together to find solutions,” he said.