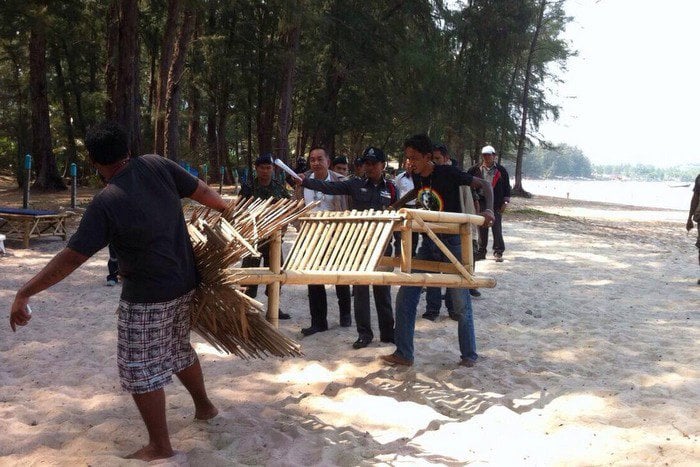 PHUKET: Nine beach vendors who had crept back onto Bang Tao Beach with sunloungers and makeshift stalls were fined 2,000 baht and had all of their items seized yesterday.

“We went to inspect the beach and found that nine vendors had violated the new beach rules by setting up sunloungers, stalls, tables and other structures on the sand,” Ma-ann Samran, president of the Cherng Talay Tambon Administration Organization (OrBorTor), told the Phuket Gazette following a raid of the popular tourist beach.

“This is their first warning – a lenient one. Next time, we will file a complaint with the police.”

All items were seized and taken to the OrBorTor office.

“We seized the items because not only were these people encroaching on the beach, but they were also operating illegal businesses outside of the 10-per-cent vendor zone,” said Mr Ma-ann.

“We are simply following the provincial beach rules as ordered by Governor Nisit Jansomwong. We must respect these rules.”

Joining Mr Ma-ann on the inspection was Thalang District Chief Veera Kerdsirimongkol, who assured the Gazette that the raid was carried out fairly.

“We had no intention to pick on any particular person or business. We are aware that beach vendors must make a living, but they must follow the regulations,” he said.

Mr Ma-ann visited the beach today to follow up on yesterday’s raid.

“I went to check the beach this morning. No illegal vendors had returned to the beach,” he said.

“I am keen to keep the beaches clean under my watch, so Thais and foreigners alike can enjoy the natural beauty of Phuket.”

Man arrested for smuggling more than 300 species of rare fish