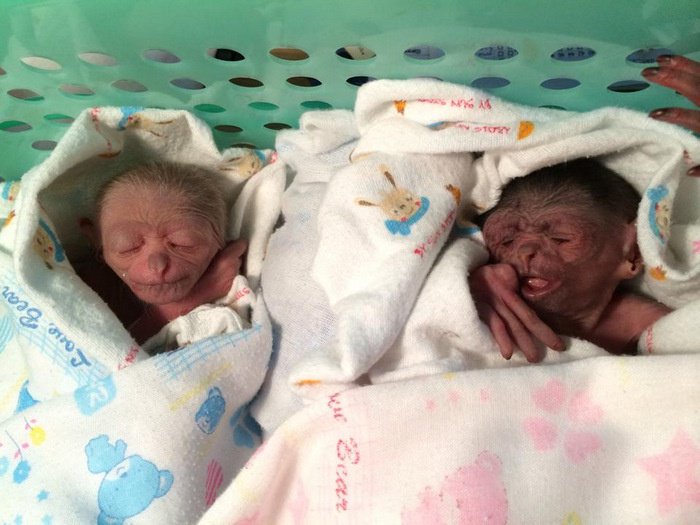 PHUKET: One of the first set of gibbon twins to be born at the Gibbon Rehabilitation Project (GRP) in Phuket has died. Staffers at the center hope to return the surviving twin to her mother on Monday.

“These are our first gibbon twins since the center was established in 1992. The twins are the son and daughter of mother Mee and father Payu,” explained GRP manager Phamon Samphanthamit.

“We released Mee and Payu on December 15 after they were both kept here for over a year. They got along well and it was Mee’s first pregnancy.

“We checked on them every day, and on December 26 we found the newborn twins. Mee was holding them both in one hand while she was hanging on to a tree.”

One of the babies fell from Mee’s grasp, but landed on the net cage used for releasing gibbons.

“We were thankful it was safe, but we saw Mee was stressed and confused. This is her first time as a mother and she was raising twins,” Mr Phamon told the Phuket Gazette.

Staff members decided to take the babies into care to nurse them, and got the chance when Mee left the twins on the roof of the release cage for food.

“Both twins were very weak,” Mr Phamon said. “We bottle fed them. The next day we returned the female as she was bigger and stronger. It is always best for babies to be with their mothers.

“We checked Mee and saw that she was coping well with her baby, so we returned the boy on December 29. Mee was okay, and looked less stressed.”

However, staffers found baby boy gibbon dead the next day.

“The next morning, we went to check on them again and found the boy dead on the cage with a bruise on his head,” Mr Phamon said.

“We thought that he might have fallen from his mother again, so we took the female baby back into care to nurse as she was weak and could not really hold on her mother.”

Yet Mee did not want to let go of her baby girl, forcing staff to tranquilize her in order to take the baby girl gibbon into care.

“We have put Mee and Payu in the release cage. We think it is better keep them together,” said Mr Phamon.

“On Monday, we will return the baby girl and we will release all three of them when we are confident that the baby girl will make it. We hope they will be a happy family.”