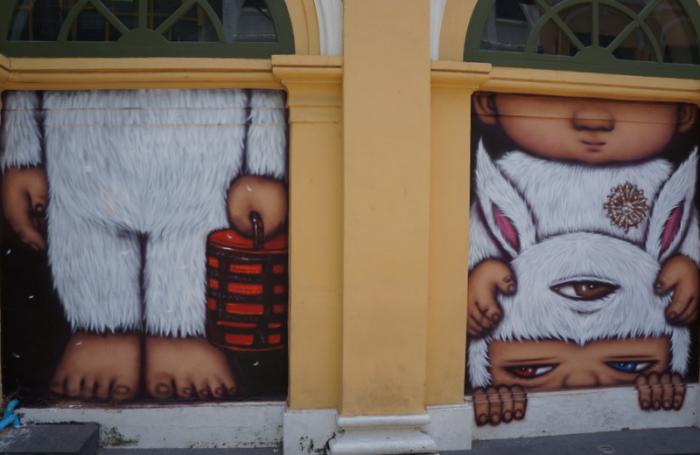 PHUKET: A controversial mural painted on the wall of the Phuket Baba Museum will be removed by the artist following a public outcry.

Painted on one of the city’s most historic buildings, the ‘Three-Eyed Kid’ garnered mixed public opinions since its unveiling on April 10. Through social media, residents criticized the artwork’s placement at what was formerly the Standard Chartered Bank, the only international bank in Phuket and a marker of the island’s period of industrialization.

Criticism of the project was also leveled at municipality support for the project through an engagement organization called So Phuket.

Weerachai Pranweerapiboon, a representative of So Phuket, said that the artwork would be removed from the museum wall. He addressed the issue at a press conference held at Phuket City Hall on April 22, chaired by Phuket City Mayor Somjai Suwansupana.

“It seems only fair that we respect the artist, Alex Face, by allowing him to remove the artwork himself,” Mr Weerachai said. “He will be available to do so between May 5-15, meaning that the artwork will be completely removed by then.”

Three other artworks sponsored by So Phuket have failed to garner the controversy surrounding the ‘Three-Eyed Kid’. Mr Weerachai said his organization will exercise greater caution during the installation of eight future projects, scheduled to be completed by October.

“Due to the nature of the artwork, we originally unveiled the painting without notifying the general public,” Mr Weerachai said. “We understood that had we notified the public first, it might have diminished the surprise and excitement surrounding the project.”

Mr Weerachai said So Phuket will create a Facebook page in order to notify the public of future installations and to receive feedback. He stressed that all funds for the projects are taken from So Phuket itself, without any investment from the municipality.

Old Phuket Town Community president Don Limnunthaphisit said that community members were shocked to find the painting up one day on one of the city’s most historic buildings.

“The core of this problem is that people are questioning why modern art is painted on the side of a hundred-year old building,” Mr Don said.

“While I understand that all of the parties involved have good intentions for Phuket, I agree with the decision to remove the painting.”