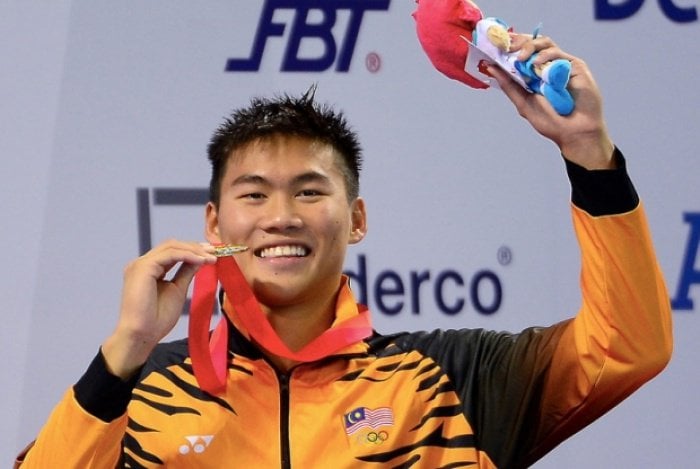 PHUKET: It was an absolutely incredible night for British International School Phuket (BISP) in the pool on Sunday at the 28th Southeast Asian (SEA) Games.

In one evening, the school’s student athletes – representing Malaysia, Philippines and Thailand – brought home one gold, one silver and one bronze medal, in intense competition against the finest swimmers in Southeast Asia.

Year 11 student Fukang Wong stole the show with a blistering second 50 meter of the 100m breaststroke to move from third to first in the final 25m of the race to take gold for Team Malaysia with a time of 1:02.46 minutes.

Next up was Year 11 student Phiangkhwan Pawapotako, racing in the 200m individual medley for Team Thailand. Phiangkhwan swam a very tactical race and pulled into a clear second-place position by the final turn, but needed to fight the final length to hold off a fast finishing Singaporean. She took second place with a final time of 2:18.56 minutes.

Earlier on in the evening, BISP graduating student Roxanne Yu, representing Team Philippines, fought a tough and strategic battle in the 200m backstroke, swimming a new personal best of 2:18.45 minutes and racing to a bronze medal position after turning fifth at the 100m mark.

“What a night team; each and every one of you made me, [Assistant] Coach Chris Gaffney and your teammates back home in Phuket very proud. Congratulations and the best of luck to those still to race,” said BISP / JSA Swim Academy Head Coach Simon Jones, who was also Head Coach for Team Thailand at the SEA Games.

The day before, Phiangkhwan claimed BISP’s first medal of the SEA Games: the silver medal in the 400m individual medley, just behind Olympic superstar Vien Thi Anh from Vietnam.

Phiangkhwan raced to a new personal best, another Olympic qualifying standard in the medley events and a World Championship qualifying time for Kazan, Russia, this summer.

Both Phiangkhwan and Fukang now have three Olympic and World Championship qualifying times between them. In addition, Fukang has also been selected for the Malaysian team at the Commonwealth Youth Games, which take place in Samoa in September.

On June 9, Roxanne blasted her way to bronze in the women’s 100m backstroke final with yet another personal best time.

The 18 year-old BISP student showed her trademark finishing speed, dropping below 1:05 minutes for the first time, finishing with a 1:04.80 time, behind Olympic finalist Tao Li of Singapore and Kania Ratih of Indonesia.

On the penultimate day of competition, Wednesday, BISP swimmers bagged another two medals in the women’s 4x100m medley relay final, with Phiangkhwan leading the Thailand team to silver and Roxanne helping win bronze for the Philippines.

On the last day of swim competition, Thursday 11 June, Fukang took the bronze in the men’s 50m breaststroke.

Next up was a battle between Phiangkhwan and Nguyen, who had already won seven gold medals at the SEA Games, in the women’s 200m breaststroke

The race was an absolute show stopper, with Phiangkhwan splitting a fraction behind Nguyen at the 100m mark in 1:13.42 minutes, and fighting back neck and neck through until the last 15m, with Nguyen out-touching Phiangkhwan for the gold, but pushing Phiangkhwan to a Thailand National Record and a silver medal time of 2:31.51 minutes.

“Over the week, our BISP swimmers have given it their all,” said Mr Jones. “They been involved in multiple races, experienced TV interviews – some for the first time – witnessed some truly world class swimming – some by themselves – and most importantly made new friendships. It’s been a truly wonderful experience, and for myself, an honor to have represented Team Thailand as a coach.”

With one gold, four silver and four bronze medals – as well as more than five National Records and four Olympic Qualifying Times – at the 28th SEA Games, BISP’s swimmers won more medals than Laos, Brunei and Timor Leste. To put it another way, if BISP were a country, they would be ninth out of 12 in the overall medal standings.

OAG to tackle corruption in Phuket