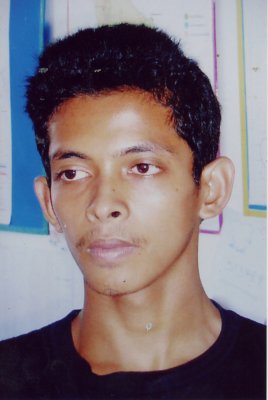 In his successful bid for freedom on February 18, Thiwa scaled the facility’s wall by using a homemade rope made from shoelaces, he said.

K. Paisal reported the breakout to Phuket Governor Niran Kalayanamit at the annual meeting of the Phuket Provincial Security Committee held this morning at Provincial Hall.

Thiwa was being held at the prison for four theft-related crimes, including two snatch-and-run crimes in Thalang for which he had already been convicted and sentenced to a total of seven years in prison, K. Paisal said.

Two other court cases are pending against Thiwa, one a snatch-and-run and the other a burglary, he added.

“He served more than one year at the prison and I believe he is still somewhere in the province,” K. Paisal said.

“As we have searched for him everywhere without success, I am happy to give a 10,000-baht reward out of my own pocket to anyone who can tell us where he is,” said K. Paisal.

K. Paisal said having Thiwa on the loose was a threat to public safety, given his criminal record.

The search for the fugitive has thus far focused on eight locales where he is know to have relatives and close friends, including sites in Krabi, Pattani, Phattalung, Phang Nga, Chumphon and Nakorn Sri Thammarat provinces.

K. Paisal said Thiwa’s escape came at a spot where one of the facility’s buildings was located close to a wall, thus enabling him to scale the perimeter and flee. The area constitutes a “weak spot” in the prison’s containment that will be rectified, he said.

Anyone with information about Thiwa’s whereabouts is encouraged to contact K. Paisal directly at Tel: 081-8552749.