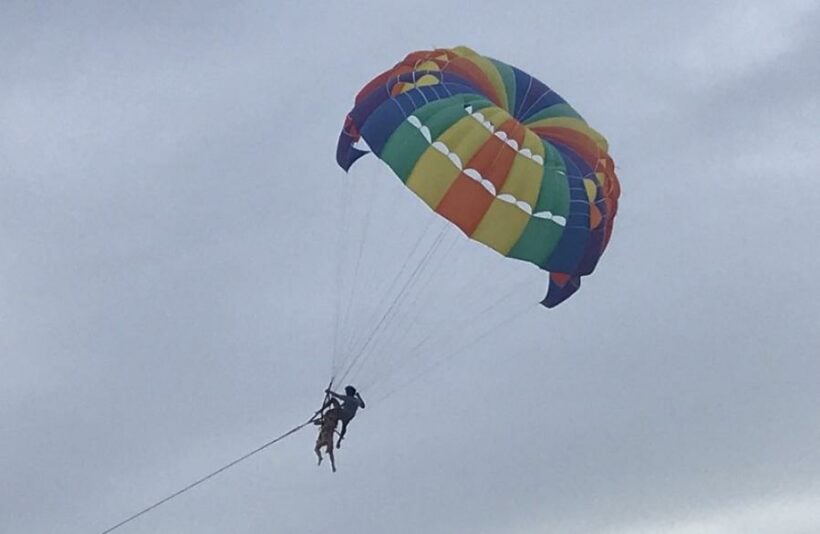 PHUKET: A 71-year-old Australian man fell to his death while parasailing at Kata Beach yesterday afternoon.

“Roger John Hussey was pronounced dead at Patong Hospital after he fell from a height of 40 meters, which caused severe injuries,” said Lt Suwisit Srirak of Karon Pplice.

Mr Hussey was married to a Thai woman named by police as Boosabong Tongsanga who was recording a video of the incident.

The boat driver, Monthein Jandang, 45, and the parasail controller, Roongroj Rakcheep, 38 (who went in the air with Mr Hussey), were charged with recklessness causing death.

“Mr Roongroj told us that Mr Hussey was nervous and panicked, so he accidentally unbuckled the equipment. He added that he tried to tell Mr Hussey to stay calm, but it was too late,” Lt Suwisit told the Gazette.

Mr Monthein and Mr Roongroj insisted that all the equipment was fully functional and in good condition. They also said that it was replaced every three months to ensure user safety.

Maintenance officers who examined the parasailing equipment after the accident found nothing broken.

However, police said it was illegal to operate the boat without the presence of a technician on board.

Ms Boosabong said that she and her husband had watched people parasail for three days before he tried it and were confident that Mr Hussey could have handled it.

“My husband wanted to try it because it was a new experience for him. He was in good health and had no problems in his life that would have caused him to do this on purpose,” she said.

Phuket Governor Norraphat Plodthong expressed his condolence to the victim’s family and has called for an emergency meeting to discuss the matter.