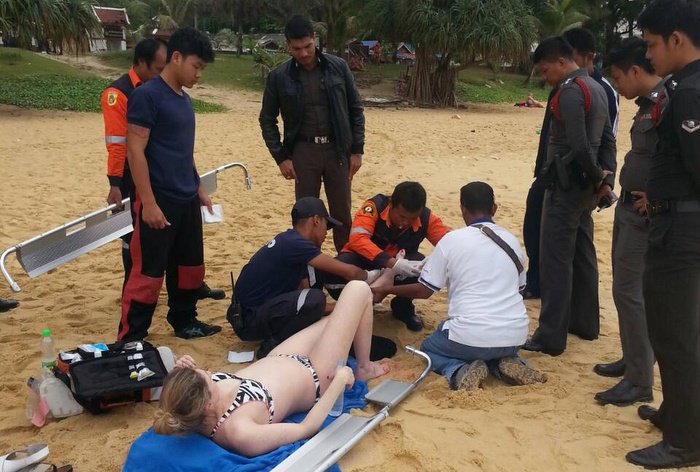 PHUKET: An Australian tourist in Phuket sustained a non-life threatening injury from an unidentified marine animal, believed by experts to be a shark, while swimming at Karon Beach this morning.

Jane Neame, 37, shouted for help about 200 meters from shore after she felt like she had been bitten twice, explained Karon Municipality Tourist Rescue Center Chief Supachai Janpen.

“When we arrived, she was laying on the beach with one foot bleeding heavily,” Mr Supachai said.

Ms Neame was taken to Patong Hospital, before being transferred to Dibuk Hospital and then finally to Bangkok Hospital Phuket.

Pictures of the wound were sent to the Phuket Marine Biological Center’s Endangered Species Unit.

“Based on the picture, it looks like the wound was caused by a shark,” said Kongkiat Kittiwattanawong, head of the unit.

“It might have bitten her twice. However, we will send pictures to experts in Bangkok to confirm.

“If we are able to prove that it was a shark attack, we will advise the governor to issue a warning to tourist in affected swimming zones.”

However, Dr Kongkiet noted that during his 20 years as head of the Endangered Species Unit, he has never come across a shark attack case.