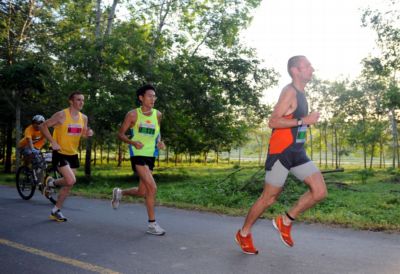 CHERNG TALAY: Australian Stephen Paine completed the 42-kilometer course around the north end of the island in 2 hours 37 minutes and 52 seconds this morning to win the men’s championship title in this year’s Laguna Phuket International Marathon.

In second place was defending champion Brent Roeger from the US. He rounded the course in 2:41:57, six minutes faster than last year. Wu Yung-Fa (2:44:42) from Taiwan finished third.

Australian Angela Louise Stevens won the women’s marathon, finishing the course in 3:14:17. Second place went to Peta-Jane Harthen (3:35:32) from Australia, and in third place was Miho Miyashiro (3:40:18) from Japan.

Races started early this morning, with the first group of marathon runners leaving the starting gate at 4 am. Although the main race started at 5 am, the first group started at 4 am this year to provide a head start to runners who may have needed four to seven hours to complete the course.

Thai celebrity Ratthasart Korasut joined 202 Team Laguna members in the 5km walk to raise funds for Baan Klong Sai School in Phang Nga province. This is the first in a series of projects Laguna Phuket has planned to help schools in need in Phuket and remote areas of Phang Nga and Krabi provinces.

Eco-marathoner and slow-running advocate Hajime Nishi also took part. With 541 marathons in 71 countries under his belt, Nishi is renowned in running circles as the founder of the “slow is beautiful” philosophy.

The marathon globetrotter and world record holder, who also took part in the Laguna Phuket International Marathons in 2007 and 2006, led a group of interested participants over the course, focusing purely on the enjoyment of the race, interaction with spectators and volunteers, and taking photos along the way.