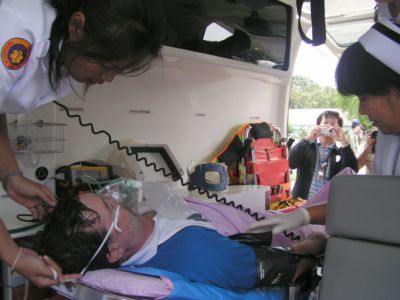 PHUKET CITY: An Australian man is recovering at Vachira Phuket Hospital after being airlifted to Phuket from the Similan Islands by the Royal Thai Navy this afternoon.

Rear-Admiral Supot Pruksa of the Third Naval Area Command, based at Cape Panwa, identified the man as Gregory Edwin Orior, 51.

The Navy base received an emergency call this morning from the Navy outpost at the Similian Islands, requesting that a helicopter with doctor and medical equipment on board be dispatched immediately.

The call to fly out Mr Orior was made after he suffered two convulsive fits.

At least one doctor and a nurse from the Narenthorn emergency medical services (EMS) center at Vachira Hospital, which responds to distress calls throughout the Andaman region, were sent to recover Mr Orior.

The helicopter landed at Phuket City Police Station at 1:10 pm.

Mr Orior was immediately transferred by ambulance to nearby Vachira Hospital.

By that time, Mr Orior was able to walk from the helicopter to the ambulance unassisted.

An officer at the Narenthorn EMS Center told the Gazette that Mr Orior suffered a convulsive fit after breakfast.

He recovered after being administered first aid, but then had another episode later that morning.

As for the cause of the seizures, a hospital official said that Mr Orior suffers from epilepsy.