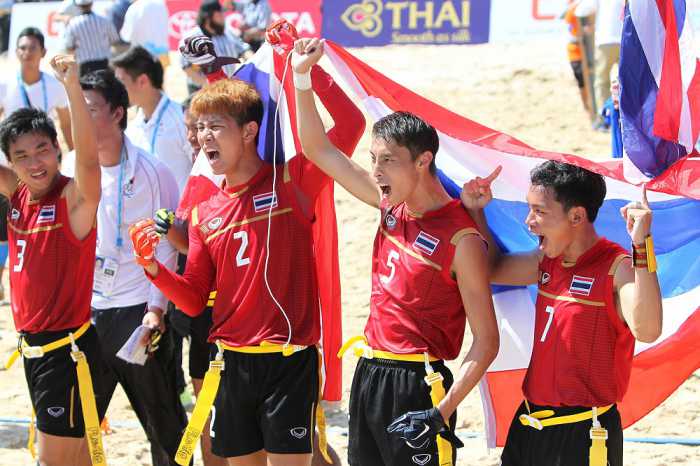 PHUKET: The 4th Asian Beach Games continued in Phuket today, with three gold medals up for grabs, ahead of the official opening ceremony at Saphan Hin tonight.

Thailand beat Kuwait to win gold in flag football at the Saphan Hin Sports Center this morning, while two other gold medals were at stake in the men’s and women’s team beach woodball events.

The opening ceremony will be held from 6:30pm to 8pm at the Saphan Hin Sports Center, with Privy Councillor and the Royal Representative Gen Surayuth Julanon presiding.

Supawat Jongsiri, better known as Suppaksorn, who is in charge of designing the performances at the opening ceremony, confirmed that a grand, spectacular ceremony has been set to impress.

The highlight will be the flame-lighting ceremony at the cauldron, and a magnificent fireworks display over Phuket Bay, with a display covering a range of 75 meters and a distance of 100m from the shore.

Varapatsorn Radarong and Tanarattha Udomchavee, the superb beach volleyball duo who won gold at the 3rd Asian Beach Games in Haiyang, China, two years ago, will ignite the Games Flame.

“A total of 1,200 performers will be in the opening ceremony, which, I guarantee, will be grand and spectacular,” said Mr Suppaksorn, inviting everyone to join the event tonight.

“Aside from the 2,500 seating capacity, some standing spaces are also available in and around the Saphan Hin Sports Center.

“Although it might rain during the ceremony, it won’t affect the performances. Furthermore, we have already prepared alternative plans just in case.”

“He praised Phuket for the amazing beauty of its beaches. Phuket is now bustling with not only more than 2,700 accredited athletes and officials, but also the accompanying family members are travelling to Phuket. This helps stimulate tourism and creates a good image of tourism in Thailand,” she said.

“I think the delegation of Thailand athletes should finish top two in the medal standing. We also stand a chance of landing the overall titles in the 4th Asian Beach Games on home soil.

“However, I would like Phuket residents and Thais from all walks of life to be good hosts and create a good impression among all visitors.”