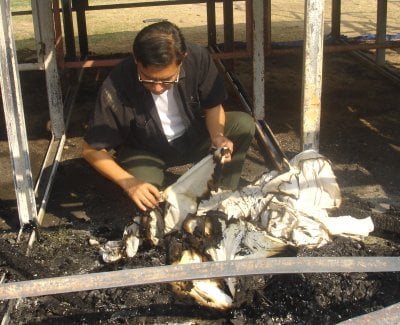 SAPHAN HIN: In what appears to have been a show of support for caretaker Prime Minister Thaksin Shinawatra, arsonists set fire to the backdrop of a stage set up by opponents of the PM early yesterday morning, destroying most of it.

The stage was set up several weeks ago by supporters of businessman Sondhi Limtongkul and the People’s Alliance for Democracy. The backdrop featured prominently the words “Thaksin Get Out!”

A security guard at the nearby sports complex raised the alarm at about 2:30 am.

It was taken away by the Phuket Provincial Police Forensics unit.

Col Nos said the evidence clearly pointed to arson. “I think a group of agitators did this, wanting to stir up trouble.

“We will try to find out who was responsible, but it’s too early to say how long the investigation will take; it depends on what evidence and witnesses we can find,” he said.

Former cop to take on Sriyada at polls