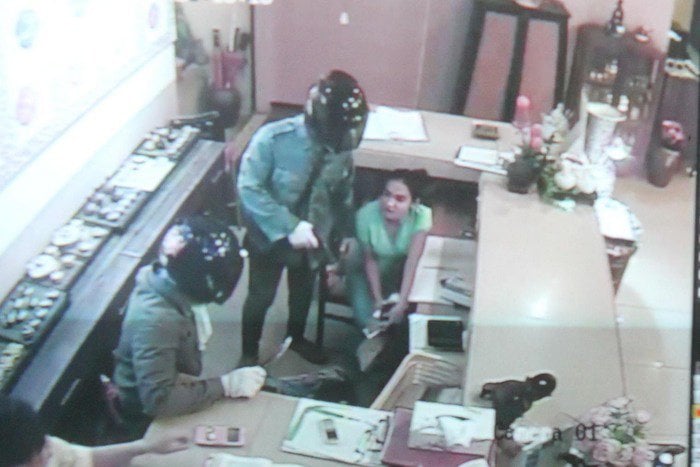 PHUKET: Police are hunting five armed robbers after they held up a spa in Phuket Town and made off with 500,000 baht cash last night.

There were about 10 Chinese customers present at the time, confirmed Col Pinit.

CCTV footage from the spa shows three armed suspects wearing white gloves and full-faced helmets drive a motorbike into the lobby of the massage parlor. In the video, one man threatens customers at gunpoint, while the other two armed suspects run behind the counter, quickly threatening the three staffers before snatching the cash and driving off.

“Two other men were waiting for the three robbers on another motorbike outside the spa,” said Col Pinit.

Police are investigating the possibility of a staffer’s involvement in the crime, confirmed Col Pinit.

“We believe someone who works at the spa might have taken part in the robbery, as the suspects knew that it was pay day and they came in at the exact moment when all of the cash was out to be counted,” said Col Pinit.

“We will bring the suspects to justice as soon as possible.”