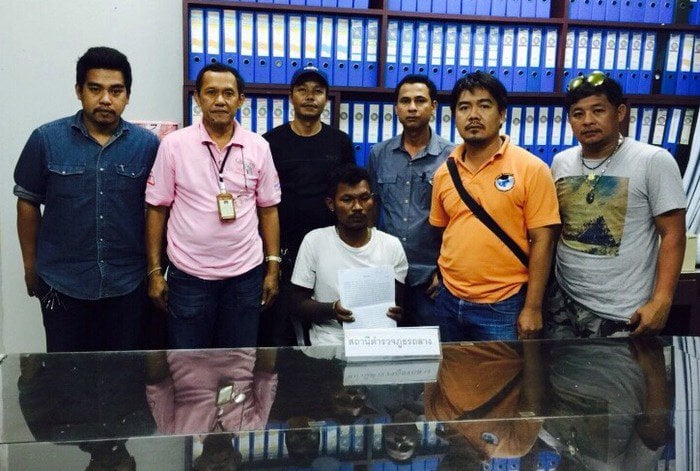 Noppon Songkram, 31, was netted in possession of an illegal firearm during a police raid in Srisoonthon yesterday. The raid focused on suspected criminals involved with illegal firearms and drugs.

“It wasn’t until we ran his name in our system that we realized he was also wanted for his alleged role in instigating last month’s riot,” said Thalang Police Superintendent Chanuchan Cholsuwat.

Mr Noppon was charged with possession of an illegal firearm, creating an illegal blockage and gathering 10 or more people together for violent acts. He was also slapped with other gang related charges such as arson, damage to public property, attacking on-duty officers and invasion of public space.

Earlier this month, a teen wanted for his role in the Phuket police station riot was also arrested for an unrelated crime.

The 16-year-old, who police declined to identify, was arrested for possession of kratom (story here).

“I assure you that we are still waiting for the right time to serve the other arrest warrants,” Col Chanuchan said.

Phuket Provincial Police, fearful of retribution, have thus far failed to hunt down those named in 66 arrest warrants issued for the attack.

“At this stage, we are in no rush to arrest the suspects,” Phuket Provincial Police Commander Teeraphol Thipjaroen said on November 5. “We need to think carefully about each arrest and the possible consequences. We do not want to see any more violence.”

Early on in the investigation, police were able to ascertain that the majority of those involved in the attack on the station were local teenagers from the Baan Don community involved with drugs or other criminal activities. Police believe that the riots were a form of ‘revenge’ against law enforcement, rather than a display of outrage at the death of two men in a police chase, as the rioters claimed.

More than 20 police officers were injured and more than six million baht worth of damage was done to the police station and nearby vehicles during the October 10 riot (story here).