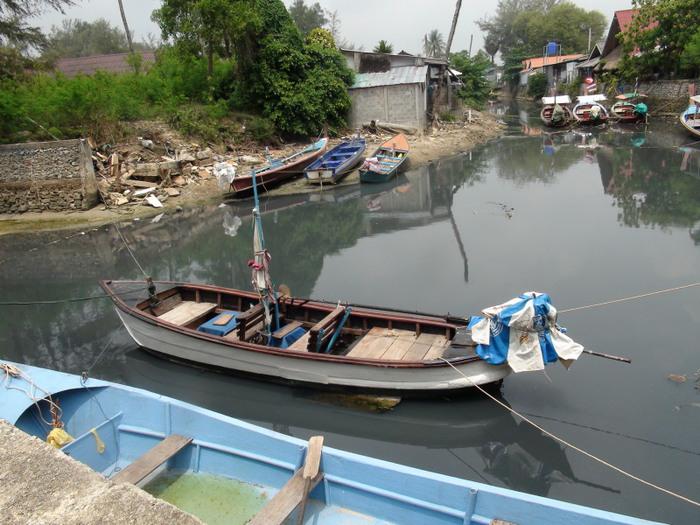 PHUKET: Dirty, smelly water is flowing across a Phuket beach again, not in the south this time, but in Bang Tao in the north, causing health and economic problems for local boat operators.

The source of the problem, say the boatmen, is local hotels dumping untreated wastewater into the Bang Tao Canal, which spills it onto the beach and into the sea.

“Some of us have skin problems because we have to walk through the water every day to make a living,” said longtail boat operator Apinan Panan.

Fisherman Saman Panan said that he has already paid 2,000 baht in medical bills to treat skin rashes, and local resident Yusub Panchalad said his skin was so itchy he couldn’t sleep.

“And a lot of tourists are afraid of going in the water because they think it might harm them. That means we have fewer customers. The water has been very bad for the past three days,” Mr Apinan told the Phuket Gazette.

When foul water flowed from the Bang Tao Canal over the beach at about this time last year, local boatmen blamed it for skin rashes and blood infections (story here).

At the end of January 2014, those projects were said to be nearly 40 per cent complete, with the entire project scheduled to be finished by August next year (story here).

Boatmen this year complain that they have seen no official response to the problem this time, but Cherng Talay OrBorTor President Ma-Ann Samran told the Gazette this morning that he is aware of the foul water and has ordered officers to inspect every hotel and restaurant in the area.

“They will be checking how they manage wastewater,” said Mr Ma-Ann. “If they find a problem, they will issue a letter giving the establishment seven days to fix it.

“The officers will go back to inspect again seven days later. If the problem is not fixed, we may shut the business down.”

In the meantime, the approximately 100 boatmen say they will continue to rush to take a shower as soon as they get out of the water, and warn their children to stay away from it.

The cost for wastewater infrastructure upgrades in Bang Tao is about the same needed for upgrades in Karon.

Karon has applied for 350mn baht from the 2015 fiscal budget to upgrade its facilities, but the director of Regional Environmental Office 15, Pornsri Suthanaruk, said the money might not be be granted due to a number of other pressing environmental projects.

Ms Pornsri suggested that the municipality borrow the money instead (story here).