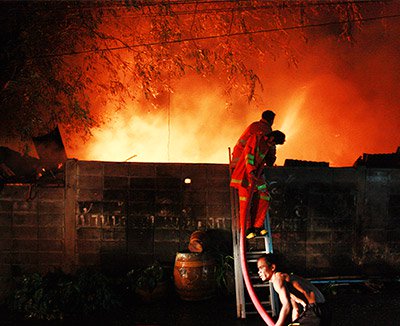 PHUKET: A Burmese labor camp said to belong to a Phuket City policeman was completely destroyed by fire this morning. The blaze, which broke out in the Samkong camp at about 4:30am, leveled 15 huts and damaged three neighboring homes.

More than 30 workers were asleep in the camp, but none was injured.

Police say the fire destroyed virtually all of the occupants’ possessions – mainly TV sets, radios, clothes and cooking fuel and equipment. The workers had had to flee the camp immediately upon awakening.

Police are unable to estimate the damage as yet because a substantial amount of construction equipment was also destroyed.

The workers told the Gazette they think the blaze came from arson, not an electrical short circuit as is often the case in Phuket’s labor camp fires. Some said they thought they knew who started the fire, but would not give any names as they feared revenge.

They said the camp, located in Soi Samakkee on Yaowarat Road, was owned by a Phuket City police sergeant. The Gazette has not been able to verify that such is the case.