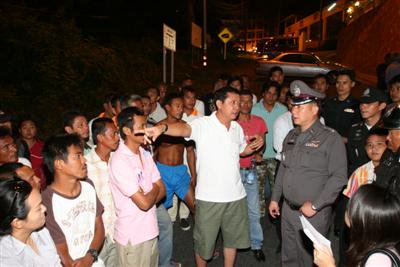 KATA, PHUKET: A mob of angry Kata residents last night used their vehicles to block the main road through Kata.

The protest followed an accident two days earlier, when a cement truck allegedly speeding through the Kata Yai and Kata Noi intersection collided with a parked van and motorcycle. Two men were injured and one might have to have an arm amputated.

The accident, recorded by Chalong Police closed-circuit television cameras installed at the busy intersection, involved a truck owned by the Chalong Cement Company. The driver was detained by witnesses and handed over to police when they arrived.

Four ‘limousine’ taxis were used to set up the roadblock, which was intended to stop cement trucks using the road.

However, the blockade caused a long tailback of cars and other vehicles from 5 pm until about 8 pm. Only motorcycles were able to pass through the blockade.

Motorists, including many tourists heading back to their hotels, were forced to turn back and find alternative routes during the three-hour standoff.

The angry residents claimed the cement mixer trucks continue to use the busy junction despite being ordered to avoid the area during peak traffic hours – 7am-9am and 4pm-7pm.

Police finally ended the roadblock at about 8pm by promising to investigate the accident further and to do a better job of enforcing the restrictions on the trucks during peak hours.

Villagers at the scene told Gazette reporters that cement trucks had caused many accidents over the past two years and that the trucks had been using the road at all hours.

New Chalong Police Superintendent Chinarat Rittakananon said he would submit a request to the Governor to extend the vehicle restriction periods. He also encouraged local businesses to work together with police to ensure that violators are reported.

Traffic police officers will be posted at the danger spot around the clock in order to enforce traffic regulations, he said.