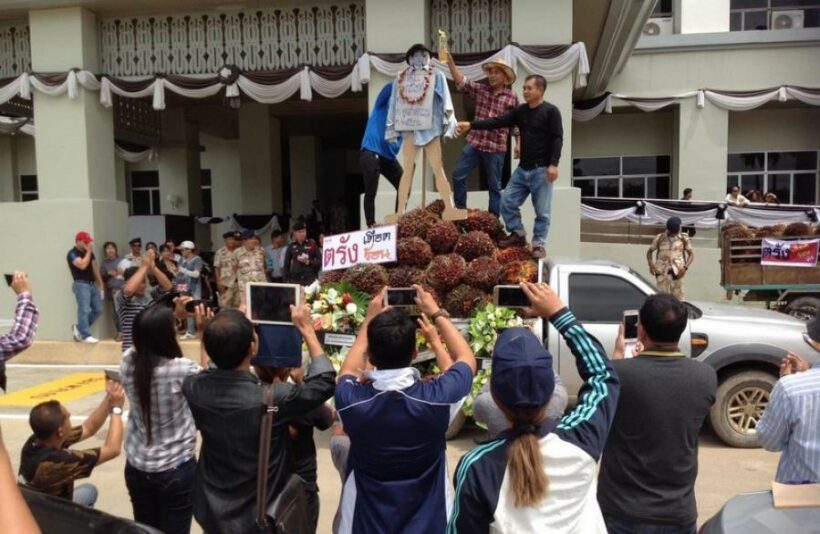 KRABI: An angry mob of more than 100 people gathered outside Krabi Provincial Hall this morning and burned an effigy of the Deputy Director General of the Department of Internal Trade to protest against the falling prices of palm oil.

Members of the protest, who had gathered from Krabi and nearby provinces, including Trang, Phanag Nga, Chumphon, Ranong, Surat Thani and Nakhon Sri Thammrat, were led by Chayodom Suwanwattana.

The group ‘demanded’ that Prime Minister Gen Prayuth Chan-o-Cha, as well as the Ministries of Commerce, Industry, Agriculture and Energy, come to their aid.

“The current price of palm oil is 3.50 baht per kg, whereas the cost of producing it is about 3.8 baht per kg,” said Mr Chayodom.

“The price of palm products has been decreasing for several years and that makes us less competitive with other neighboring countries,” he added.

The group’s main demands are as follows:

1. The Ministry of Commerce must implement international trade models to palm oil (particularly those currently being followed in Malaysia).

2. The Ministry of Agriculture must set a ‘standard selling price’ for palm oil.

3 The Ministry of Agriculture must gift at least a 20% subsidy to palm oil farmers.

4. The Ministry of Energy must solve the problem of over production by finding more buyers.

“If the government does not meet our demands, we will organize an even bigger protest to make our voices heard,” said Mr Chayodom.

Krabi Vice Governor Nob Kongpul met with the protesters and assured them that he would bring the matter to the Prime Minister’s attention.

One killed in collision with garbage truck