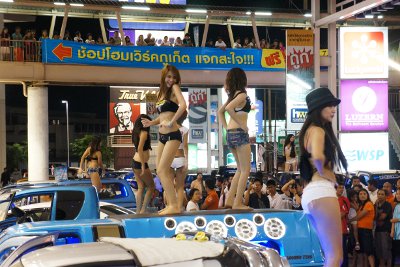 PHUKET: The 14th Andaman Motor Show currently under way at HomeWorks, opposite Central Festival Phuket on the bypass road, is enjoying one of its best years in car sales.

The six-day event, this year under the theme “Summer on the Beach”, ends on Wednesday.

“We don’t have final figures for the overall number of car loan applications yet, but I have to admit that we are making better sales this year than the first two years we attended,” said Phichet Siripreuttikun, Kiatnakin Bank’s New Car Loan Marketing Manager for all of Thailand.

“By the nature of this kind of event, people usually make their decision whether or not to buy a car on the second-last day or on the final day of the show,” he added.

The trend for the car buyers this year is favoring pickup trucks and eco-friendly cars, said Mr Phichet.

“Pickups have became more popular since the flooding in Central Thailand, but this year is another good year for the eco-car market,” he added.

Phuket is the leading province in the South for the bank’s car loans operations. “We have approved more loans for people in Phuket compared with all other provinces in Southern Thailand,” Mr Phichet explained.

“Besides the wide range of vehicles from all the top dealerships, people who want to buy a car can expect special promotions that are difficult to resist,” he added.

“I want to buy a pickup truck and I came to this event because I know I can expect tempting deals here – and I have found some great deals, even better than what they are offering at the showrooms,” said Mr Sumed.

“I will have to discuss this with my family and make a decision before the show closes,” he added.

However, not all visitors are seeking to buy a new car. The entertainment provided is proving a major attraction for the show.

On Sunday, popular Thai singer Kanitkul “Praw” Nestbud performed a mini-concert to a large crowd, while the Andaman Junior Talent Contest on Saturday drew families from across the island.

Mr Kritchapanat said the highlight on the last day of the show should not be missed.

“Motor shows are all about special cars, tempting promotions and beautiful ladies. Every night of the show we have sexy coyote dancers showing their moves outside the exhibition hall.

“On the final day of the event, we will have ‘Sexy Wash’ by Miss Ananya ‘Baifern’ Mongkolthai – who was runner-up of The Look Supermodel 2011 beauty pageant and a Final 20 contestant in the Miss Maxim 2011 contest – as well as other famous models.

“The show will start at about 6pm on Wednesday,” said Mr Kritchapanat.

Phuket lifeguards vow to “not let tourists down’