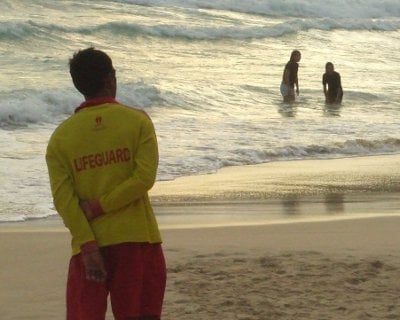 PHUKET: A re-run of last year’s beach safety scare has emerged following the Phuket Lifeguard Club warning that their contract will terminate on April 2, and that they have not received any official notification of what is to happen next.

Phuket Lifeguard Club President Prathaiyut “Nut” Chuayuan today told the Phuket Gazette that he had received no information as to who would safeguard swimmers when the current contract with Phuket Provincial Administration Organization (OrBorJor) ends on April 2.

“I believe the OrBorJor will open tenders for anyone interested in providing the service, but we have yet to decide if we want to renew the contract,” he said.

“Last year was tough. We’re exhausted and some of us want to take a rest. I think it would be fair if the OrBorJor opened the bidding process to others. But if they can’t find anyone to carry on the service, we will do it. Our top priority has always been public safety,” he added.

Uten Singsom, head of the Phuket Lifeguard Club at Kata-Karon, said, “It all depends on what the OrBorJor will do. We have to return the equipment to the provincial authorities when the contract ends. With no lifeguard equipment we can’t work.”

Mr Uten made it clear that the change in weather as Phuket moves towards monsoon season was a serious concern. “The weather has changed. Last weekend we sent six tourists to hospital when big waves struck,” he said.

“I am worried that with the coming [southwest] monsoon season, if there are no lifeguards on the beaches, tourists will be at risk. Even with lifeguards on duty 10 people drowned in this area last year,” Mr Uten added.

OrBorJor Acting President Manop Leelasuthanon told the Phuket Gazette that they were aware of the contract end date and would be speaking with the OrBorJor‘s tourism department to resolve the matter.

“We will probably hire the Lifeguard Club for a few more months until we have a new OrBorJor President,” he said.

“After that we can offer a tender to provide the lifeguard service. The important thing is that there are lifeguards on duty at the beaches,” he added.

When last year’s contract ended on February 26 there was a noticeable absence of lifeguards from the beaches, until after the signing of a new contract on April 2, 2011.

Phuket to hand out souvenir shirts for Cabinet meeting