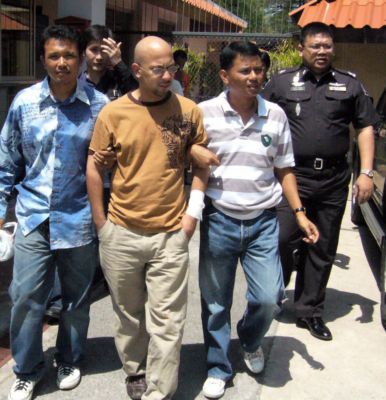 PHUKET (Gazette, Nation, Kom Chad Luek): A man wanted for child molestation by police in the US state of Missouri was arrested Tuesday afternoon and has been turned over to the US Federal Bureau of Investigation (FBI) for extradition.

During questioning, the suspect, Earl Russel Bonds, tried to kill himself by cutting his left wrist with scissors, but police seized the scissors from him in time.

Bonds, 42, was handed to FBI agents at Phuket International Airport last night and flown to Bangkok to await an extradition order to the US.

Bonds was with his Thai boyfriend when officers from the Phuket Tourist Police and Phuket Immigration Police arrested him at a rented house on Soi Yanui in Rawai about 2 pm on Tuesday.

Police said Bonds entered Thailand August 30 last year and worked as an English teacher, then later as a freelance columnist for an overseas publication.

Bonds did not resist arrest and admitted he was the person on an FBI wanted list, but refused to answer further questions, police said.

Police said Bonds asked for tranquillizer pills during his brief detention at the Phuket Immigration Office before FBI agents picked him up. He grabbed the scissors and cut his left wrist when a police officer on guard turned away to get him water for the pills.

A native of St Louis, Missouri, Bonds has been charged in the US with four counts of molesting an 11-year-old boy in 2003. He was charged in 2004 and fled after posting US$10,000 bail, according to the popular St Louis Most Wanted television show aired in that city by the local Fox Television affiliate in that city.

Phuket Immigration Police Superintendent Pol Col Chanatpol Yongbunjerd told the Gazette today he first received a report from Immigration headquarters in Bangkok that Bonds might have been hiding out somewhere on the island.

The initial investigation did not get far due to a lack of details and the fact that Bonds was listed as an African-American, which led investigators to expect him to have a much darker complexion than he actually does, Col Chanatpol said.

Immigration Police had visited his home once earlier, but did not arrest him because they thought he did not match the FBI’s written description.

Further investigation with the help of the Tourist Police led finally to the arrest, Col Chanatpol said.

Bonds had been issued a work permit by the Phuket Employment Service Office as an employee of STN Company Ltd, which described itself as a “business management and development services company”.

Police failed to locate Bonds at the address on the work permit, but subsequent investigation revealed that he had changed jobs and begun working as an English-language teacher and freelance writer, Col Chanatpol said.

At the time of arrest, Bonds had overstayed his permit-to-stay issued by Immigration, he added.

Bonds last year applied for work as a travel writer with the Gazette under the name Chris Bonds and supplied as a writing sample an Internet link to a short fiction story which won him first prize in a local writing competition held by The Boathouse in Kata.

The story is a first-person account of a child who is subject to sexual abuse at the hands of his own father.

In a strange irony that hints at the cycle of such abuse, the story is entitled Escape From Home.