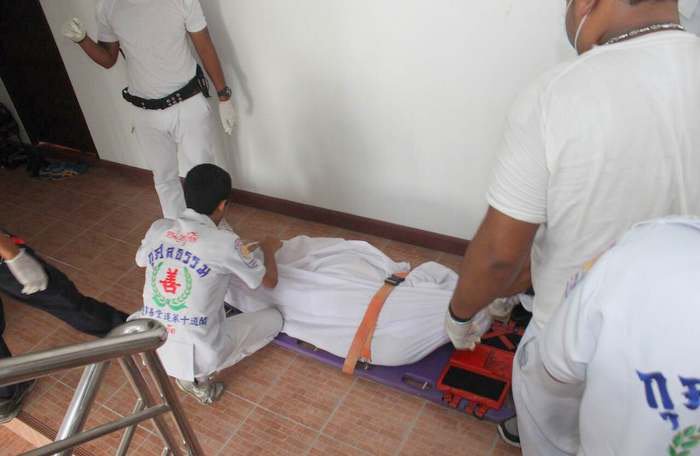 PHUKET: The alleged victim of a robbery on Friday evening was found dead, hanging from the door to the rooftop terrace of her apartment building yesterday morning.

Jantana Seangdee, 37, filed a report with Phuket City Police that two thieves robbed her of her brother’s 400,000 baht in cash after kicking her off her motorbike and stealing her bag (story here). However, police have yet to confirm Ms Jantana’s account of the incident due to a lack of evidence.

Ms Jantana was expected at the police station yesterday morning for further questioning related to the robbery.

“We called her by phone many times, but failed to get through. We also tried to reach her friends, but no one knew where she was,” Maj Somchai Nooboon of Phuket City Police said.

About 9:45am Phuket City Police received a report that Ms Jantana was found dead.

When police searched her pockets they found a phone and a letter.

“In the letter, Ms Jantana apologized to her family. She said she decided to hang herself because there was no way she could find enough money to repay her older brother. She also denied making up the robbery and mentioned that she wanted to be reborn as her parents’ daughter again in the next life,” Maj Somchai said.

Police believe that she died at least four hours before her body was discovered.

“Neighbors said they heard someone walking on the rooftop at around 2am yesterday, but just ignored it. They were only alerted to her death when the cleaner found her body,” Maj Somchai confirmed.

Ms Jantana’s family confirmed that the letter was written in her handwriting and did not have any questions about the circumstances surrounding her death.