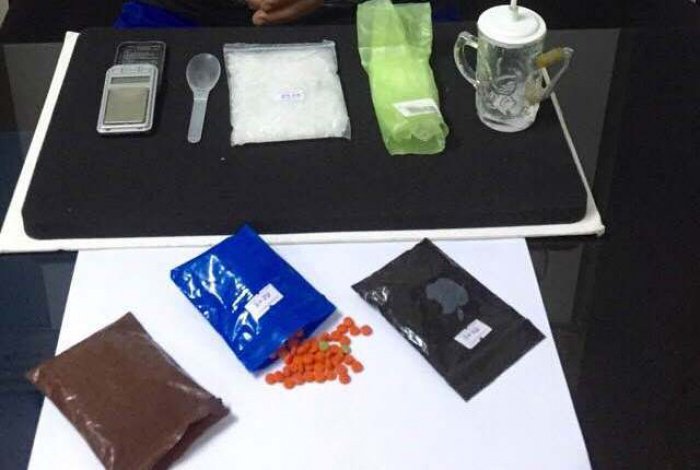 Nattawut Tankongkoi, 29, was arrested with 115.86 grams of ya ice (crystal methamphetamine), a scale and drug paraphernalia in Srisoonthorn on Monday.

“Mr Nattawut has already served time in prison for drug related crimes in Phuket; apparently he went back to his old ways,” said Maj Ritthichai Choomchuy of the Phuket Provincial Police.

Later that night, 27-year-old Kittipon Intarasa was nabbed by police in possession of 1.12 grams of ya ice, a homemade firearm and matching ammunition.

“We got a tip-off saying he would take orders by phone and then often meet buyers at the Tha Rua Shrine in Thalang. We simply had to wait for him to arrive to make the arrest,” Maj Ritthichai said.

Mr Kittipon claimed that he was running the drugs for a friend who police only named as ‘Eak’.

Though Mr Kittipon said that Mr Eak was the one buying and selling the drugs, he confessed to police that the illegal firearm was his.

A third drug dealing suspect was arrested just before midnight on Monday.

Panya Hemthanon, 37, was arrested with 53.55 grams of ya ice, 190 ya ba (methamphetamine) pills and drug paraphernalia at a rental home in the Irawadee Community in Rassada.

Mr Panya told police that he had already purchased three shipments from a person who police later only identified as ‘Ms Piew’.

All three men were charged with the possession of a Category 1 drug with intent to sell. Mr Kittipon was additionally charged for possession of the illegal firearm.

“We will use the information provided by the suspects to arrest other members of their drug networks,” Maj Ritthichai said.

Man sets himself on fire at Phuket temple