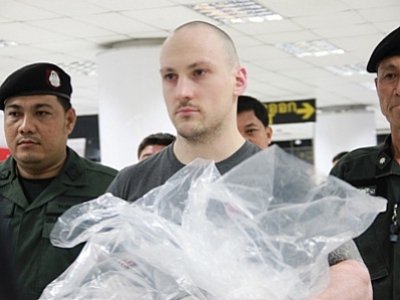 PHUKET: Accused murderer Lee Aldhouse arrived back in Phuket tonight at 8:11pm, on Flight 221 from Bangkok.

Dressed in a black t-shirt and carrying his personal belongings in a large, clear plastic sack, the shaven-headed Aldhouse looked defiant and focused.

He was accompanied by a large contingent of police officers, including members of the Tourist Police and Special Operations Unit. Aldhouse was escorted from the UK by Intranee Sumawong, Executive Director of International Affairs at the Office of the Attorney General in Bangkok, and officers from Interpol.

The accused killer, also known by his kickboxing nickname “The Pitbull”, fled Thailand on August 17, 2010, three days after the murder of 23-year-old American Marine Dashawn Longfellow, whom he had allegedly stabbed to death.

He was arrested by British authorities upon arrival at Heathrow Airport, London, on an unrelated charge.

The British national is the first person to be extradited from the UK to Thailand in more than 100 years, according to Col Wichit Intorrasorn from Provincial Police Region 8.

“Prosecutors in Bangkok worked hard on this case and kept in contact with the UK government,” he said.

Col Wichit, who was the superintendent in charge of the case at Chalong Police Station while the Aldhouse murder case was being investigated, will be returning to Chalong until the case is completed.

When asked by the Phuket Gazette how he felt to be back on the island, Aldhouse replied stoically: “Wonderful.”

Aldhouse is now being questioned at Chalong Police Station. He will be transferred to Phuket Provincial Court on Monday.