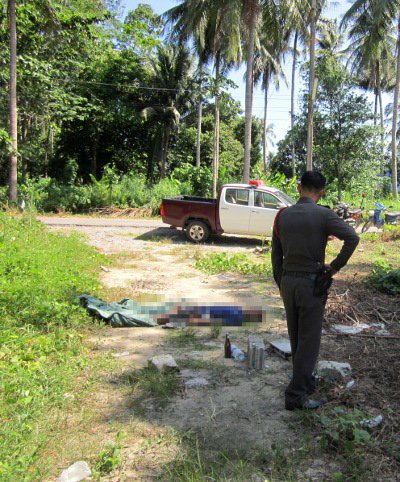 PHUKET: Phuket Police believe that cardiac arrest, possibly triggered by excessive alcohol intake, may have caused the death of a man whose body was found by the side of a road in Sakoo yesterday afternoon.

Tah Chat Chai Police were notified of the discovery at 2:45pm.

At the scene in Sakoo Village 4, off the old airport road near Nai Yang Temple, they found the body of the man lying face up on a dead-end dirt soi, a bottle of Thai whiskey at his side.

He was identified by his house registration papers as 51-year-old Sunan Srisawat, a resident of Mai Khao Village 4.

Police found no signs of trauma to the body or evidence of foul play at the scene.

Mr Sunan worked selling vegetables to local retailers and was known to have been a heavy drinker, said police.

After police concluded their investigation Phuket Kusloldharm Foundation workers transported Mr Sunan’s body to Thalang Hospital to be held until claimed by relatives.

Also in Thalang, the body of a diabetic man was found outside his home in a remote area of Pa Khlok late yesterday morning.

The discovery was made by a Pa Khlok Tambon Administration Organization worker who was delivering government assistance money for the elderly to the man.

The body was identified as that of Meng Sae-Eaw, 61.

An investigation revealed that Mr Meng was a diabetic who had no immediate family at the time of his death, and was only periodically visited by relatives.

Police estimated the time of death at about one week before the discovery of the body.

The presence of the badly decomposing body is thought to have gone undetected because of the remote location of the house.