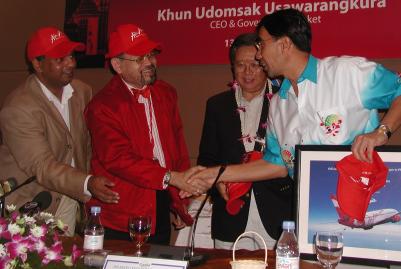 PATONG: AirAsia, a new budget airline based in Malaysia, launched its first service, between Phuket and Kuala Lumpur, at the weekend. The exceptionally low rates of 810 baht one way for the daily flights apply until January 31. Seats must be booked 14 days in advance to qualify for the low price. Company CEO Tony Fernandes said that AirAsia will also introduce a Kuala Lumpur-Bangkok service on January 15, with seats costing as little as 990 baht. “Generally, large airlines have dominated routes so it took a while to get approval. We want to expand the market,” Mr Fernandes said, adding that he was expecting stiff competition. Thai Airways International (THAI) announced yesterday that it too was entering the low-cost airline market, with its Sky Asia budget airline scheduled to take off in early April. Sky Asia will be the third budget airline launched in Thailand in quick succession, with Orient Thai Airlines’ One-Two-Go also starting services earlier this month. Speaking to media from Malaysia, Japan, Singapore and Brunei at the AirAsia press conference on Saturday at the Novotel Coralia, Phuket Governor Udomsak Usawarangkura said, “I hope these remarkable flights will benefit tourism for Phuket.” He added that the island’s tourism industry may have to make some adjustments to cope with the increased number of arrivals the low fares can be expected to attract to the island. AirAsia’s interests in Thailand are held by AirAsia Aviation, the largest shareholder in which is Shin Corp, controlled by the family of Prime Minister Thaksin Shinawatra. Responding to concerns that the AirAsia might have an unfair advantage in the market because of its political connections, Mr Fernandez said that Shin Corp was chosen from among five potential investors for its financial strength, not because of its connection to the PM’s family. He added that Shin Corp’s expertise in information technology was an undeniable asset to the airline’s operation, and that AirAsia flights can be booked though any AIS (Advance Information Service) or Telewiz shop – also owned by Shin Corp.

Regional leaders to meet in Phuket