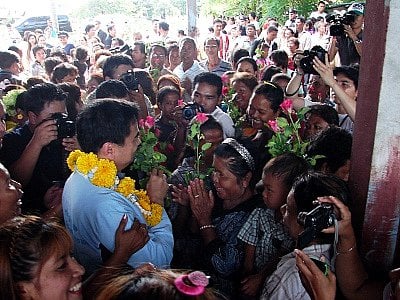 PHUKET: Caretaker Prime Minister Abhisit Vejjajiva arrived in Phuket this afternoon ahead of a rally at Saphan Hin in Phuket Town tonight to mark the launch of the Democrat Party campaign for the July 3 national election.

Top of his agenda was to inspect the site of the Phuket International Convention and Exhibition Center in Mai Khao, while accompanied by Satit Wongnongtaey, Minister to the Prime Minister’s Office, and Phuket Democrat MP candidates Raywat Areerob and Anchalee Vanich Thepabutr.

Next, the entourage visited local sea gypsies at Laem La in Mai Khao, where the Democrat leader gave a short speech.

By 4:30 pm, the caretaker PM had moved to the evening market in Thepkrasattri Road in Baan Lipon, Thalang, to speak with villagers there.

Mr Abhisit arrived on stage at Saphan Hin about 6:30pm.

Joining him on stage was Democrat deputy leader Suthep Thaugsuban.