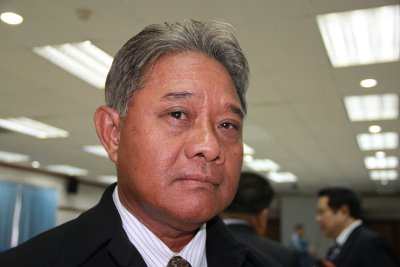 PHUKET: The requests by two taxi operating companies to boost the number of vehicles operating at Phuket International Airport have been declined until at least June, while plans for the allocation of business and services under the 5.7-billion-baht expansion project at the key tourism portal are finalized.

“We have hired a consultancy company to research and come up with a model for commercial activities at all [AOT] regional airports. They have until June next year to complete the plan. After that, we will select the operators for every commercial activity to be conducted at the airports: shops, taxis, ground handling and food stalls,” said Mr Pratheep.

“Once built, the new terminal will be for international passengers and the existing terminal will be used for domestic flights, so it is best to organize the commercial zones and concessions before the Phuket expansion project is completed,” he added.

Phuket Airport will be the first AOT regional airport to use the plan drawn up by the consultancy, and the plan will be developed specifically to match the expansion project, Mr Pratheep said.

“So we have frozen the number of taxis operating at the airport for time being. Phuket Mai Khao Company has 110 taxis and the Phuket Car Service (PCS) Cooperative has 180, and there are 80 metered taxis, which will all continue to serve the airport until plan is completed,” he explained.

As the concessions the two non-metered taxi companies were operating under expired on September 30, the concessions were extended under the current conditions until June 2013, Mr Pratheep added.

The PCS in June this year requested to boost the number of its vehicles at the airport as part of its negotiations in renewing it concession, which expired on September 30.

Lack of agreement prompted a visit by the Senate Standing Committee for Transportation in August, during which Prakop Punyawai, who presented himself as the “managing director” of PCS, said, “The AOT is considering allowing 30 more metered taxis to serve the airport, but according to the concession we have with AOT, if you allow 30 more metered taxis to serve the airport, you must allow us to boost our numbers by 60 vehicles.

“Under the current concession we have, we now pay the AOT 1.5 million baht a month. This is a very high price,” Mr Prakop said.

However, Kecha Saksomboon, Chairman of the Senate Standing Committee for Transportation, who was present at the meeting at Phuket Airport in August, yesterday said he agreed with the plan to freeze the number of taxis at the airport.

“The current taxi concessionaires have agreed to extend their contracts for six months. We have to wait for the airport research to be conducted and for the plan to be drawn up of how to best manage commercial operators at the airports. That would be best for both sides.”

However, Jirawich Pitikulsathit of Phuket Center Tours called for AOT to restrict the number of shops and service kiosks permitted to operate at the airport.

“Local businesses such as ourselves have been operating out of Phuket Airport since it opened 24 years ago, and we would like the airport to consider limiting the number of new operators allowed because right now the inside of terminal seems tight and jumbled,” he said.

The AOT came under criticism earlier this year for being too focused on collecting rents on shops at the airport terminals it operates, including Phuket, namely by allowing too many shops to open on the premises.

Earlier this month, on the 24th anniversary of Phuket Airport operating, AOT Executive Vice President (Regional Airports) Acting Sub Lt Naris Yoadchan said, “In the year up to last month we made 1.7 billion baht profit, that is 20mn baht more than the previous year, and we expect that to increase that by 10 per cent in the next financial year.”

Sub Lt Naris also apologized for any inconvenience to travellers during the expansion work, which he said would begin this month when the first of the foundation piles is driven into the ground.