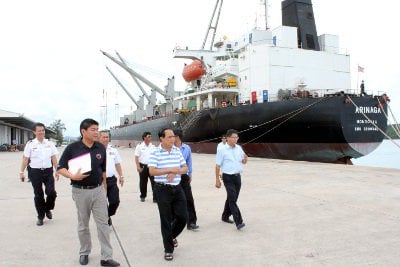 PHUKET: The representative of a major cruise line operator that brings thousands of tourists to Phuket each week has lobbied Provincial Hall to stop the company from having to pay “extra fees” levied every time the Phuket Deep Sea Port is double-booked.

At a meeting headed by Phuket Vice Governor Somkiet Sungkaosuthirak on Wednesday, Thanin Thumsuwan of Thoresen Shipping and Logistics Co Ltd explained, “Two of our cruise liners dock at either Phuket Deep Sea Port or anchor off Patong Beach every week, depending on the weather.

“We have to inform the port about a year in advance of when our cruise liners will arrive at the port. But when the time comes, if a cargo ship is docked at the port when one of our ships is due to arrive, the port authority has to ask the cargo ship to move out before we arrive, and dock again after we leave.

“Each time this happens, the cruise liner is asked to pay an extra fee. This is not fair,” said Mr Thanin.

Thamrong Thongtan, Chief of the Phuket Treasury Office, expressed his concern to V/Gov Somkiet, saying, “This practice was introduced without informing them first, so we are afraid that if this problem continues, it will affect the tourism industry and overall economy of Phuket.

“I therefore would like the relevant organizations to think about the potential solutions to the problem,” Mr Thamrong added.

However, Wattanachai Raunglertpanyakul, Director of Chaophaya Terminal International Co Ltd, which has the government concession to operate the Songkhla and Phuket Ports, explained that the service at the Phuket Deep Sea Port was “first come, first served.”

“Even though the [cruise line] company informs the Phuket port in advance of the exact times when their ships will arrive, they still have to wait for any ships using the port to finish what they are doing before they can dock at the port,” he explained.

Mr Wattanachai highlighted that his company was already “bending the rules” on safety in order to support tourism and allow the large cruise liners to use the port.

“The Phuket Deep Sea Port is a cargo port with a quay 360 meters long. Two ships can dock at the same time if the ships do not exceed 175m each. We allow [cruise liner] ships up to 210m long to dock, but the port is not designed to handle ships that size. We allow them to do this only for the sake of supporting the tourism industry,” he explained.

Mr Wattanachai added that, as a temporary solution, he had brokered a deal with cargo ship companies that use the port.

“We have made an agreement with cargo ships that if a cruise liner loaded with passengers wants to dock while they are using the port, they will exit the port to allow all passengers to be unloaded from the cruise liner,” he explained.

The port director seized the opportunity to highlight that the stalled port expansion would solve the problem.

“We plan to extend the port from 360m to 420m long so it accommodate more than one large ship at a time. We also plan to build an arrival and departure hall for passengers. It will take at least two years to complete the construction, including passing its Environmental Impact Assessment (EIA).

“When the construction is complete, it will help to fix this problem. Until then, we will have to continue doing what we are doing to fix the problem in short term,” Mr Wattanachai explained.

However, the project to expand the port, at a cost of more than 100 million baht, has stalled over its (EIA) report.

Regardless, Vice Governor Somkiet suggested that, for now, Mr Wattanachai continues with the current solution until the expansion construction has been completed.

“I also recommend that the Phuket Deep Sea Port issue a notice to explain the reasons why the cruise liners have to pay the fee and how much it will cost.

“For my part, I will raise this issue with the governor as the Deep Sea Port is an important gateway for tourism in Phuket,” said Vice Governor Somkiet.

AOT freezes boost in taxis at Phuket Airport until June