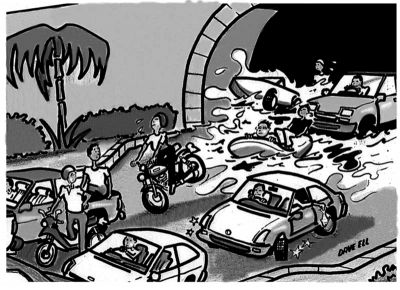 PHUKET: Public debate has intensified in recent weeks as road projects that have been talked about for years appear closer to becoming reality in Phuket.

Despite the recent chaos in Bangkok, the number of tourists visiting the island continues to grow. Airports of Thailand (AoT) reported over 120,000 international arrivals at Phuket International Airport in April 2010, a 41% increase year-on-year. The AoT expects this trend to continue, as evidenced by its 5.7 billion baht plan to double our airport’s passenger capacity to 12.5 million by 2013.

With ever more people coming here, passenger car sales remain brisk. Sales increases of around 40% year-on-year have been reported by many dealerships for the first quarter of 2010. The increase has been buoyed by sales to foreigners, who account for up to half of all business at some dealerships, as well as Phuket’s world-renowned lack of reasonably priced public transport.

Phuket Governor Wichai Phraisa-ngop has worked hard at improving the island’s road network, coming out in support of a plan to bore a pair of tunnels beneath Patong Hill to facilitate transport between Patong and Kathu. (See two-page news feature, current issue of the Phuket Gazette. Digital subscribers click here.)

The Gazette likes the tunnel, but the only real, long-term solution to the traffic problems in Patong will have to include a drastic reduction in the number of taxis and tuk-tuks; introduction of a bus or songthaew system; proper drainage to get rid of the recurring flooding; and, of course, expanded public parking to keep all the unlawfully parked vehicles off the streets.

Another key contributor to Patong’s traffic woes is the poor regulation of development in those few areas of the municipality not already covered in concrete. These include stretches along Phang Muang Sai Kor Road and Phra Barami Road, where property values could soar if the tunnel becomes a reality – a fact not lost on the project’s supporters.

As monsoon conditions intensify in the coming months, it will be interesting to observe the results of Patong’s efforts to combat the chronic flooding and creation of unwanted new rivers.

Along the bypass road, there are plans to ease traffic congestion at the Samkong (Lotus) and Darasamuth School (Central Festival) intersections by building underpasses and a flyover.

Much like the situation in Patong, these measures will do little to ease congestion in the real trouble spot – where Chao Fa West Rd loses 30-40% of its useable width (just south of Wichit Songkram School) and remains constricted all the way to the Phuket Software Park intersection.

While there will be some benefit to east-west traffic flow, all the underpasses and new flyover are likely to achieve on this stretch of the bypass road is to get motorists to the traffic jam more quickly than is currently the case.

Once again, the only durable solution to Phuket traffic is one that encourages people to leave their cars at home: Credible Public Transport.