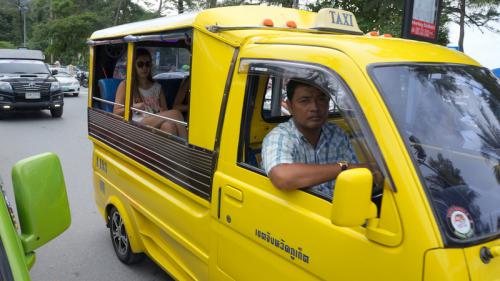 PHUKET: Patong Police are looking forward to giving the people of Phuket a gift for the New Year – public parking spaces along the Patong beach road that are free of taxi and tuk-tuk thugs.

Lt Col Akanit Danpitaksat, Deputy Superintendent of the Patong Police, said his team was ready to enforce the new regulation to reduce the number of taxis occupying parking places throughout Patong and elsewhere in Phuket.

The regulation was signed into effect by a Phuket Provincial Government proclamation issued on November 18.

“Efforts will initially focus on the beach road, but we will later target the taxi ranks along Rat-U-Thit 200 Pi Road and Phang Mueang Sai Kor Road,” Col Akanit said.

“Taxis and tuk-tuks will be limited to five vehicles – not 16 as they have now – at each of the seven taxi ranks to be set up between Prachanukroh Road and Soi Bangla,” he explained.

“With the new limit, we are looking to reclaim about 87 per cent of the 932 meters along that stretch of road,” Col Akanit said.

Anyone who encounters unruly or threatening behavior by taxi or tuk-tuk drivers is urged to call the Patong Police immediately.

“Call 191 at anytime if you have been deceived, threatened, attacked, overcharged, dumped somewhere that is not your agreed destination, blocked from entering another taxi or tuk-tuk, or forced to use a particular taxi or tuk-tuk,” Col Akanit said.

However, he warned, “Do not file a false complaint. We take this seriously, so if you do it, you could be charged with intentionally reporting false information.”

Col Akanit urged all revellers heading to Patong to celebrate the new year to exercise caution while having a good time.

“We will have officers from all across the island assisting us on New Year’s Eve, as we are expecting about 100,000 extra people in town for the celebrations,” he said.

“Do not drink and drive, and please be careful where you go and who you are with. Stay in public places with friends and beware thieves wanting to steal your handbags or other belongings,” Col Akanit advised.

“If you do take a friend back to your hotel room, make sure they leave a copy of their ID card at the front desk. It makes it much easier to find them if anything is stolen from your room while you’re asleep,” he added.

“We wish one and all a Happy New Year in Patong” Col Akanit beamed.