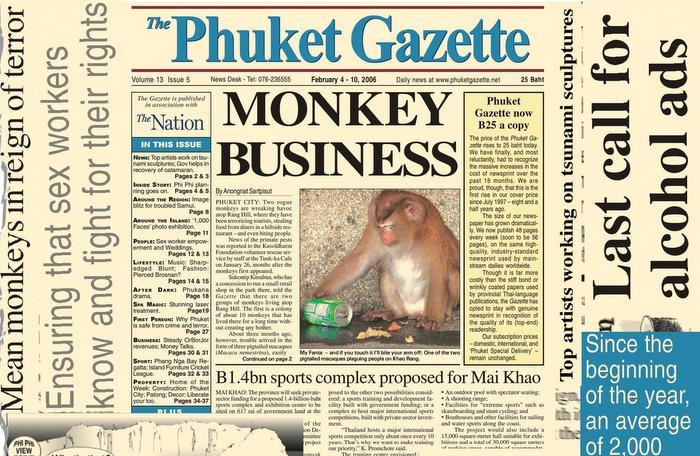 PHUKET: Though an exotic beast to most foreigners when they first find their footing in Thailand, it takes very few interactions with monkeys to realize that they are properly aggressive, arrogant deviants. This sort of Monkey Business, far different than the mafia muppeteering that destroyed our public transportation system and deflowered our beaches, made page one in the February 4-10, 2016 Phuket Gazette.

“Two rogue monkeys are wreaking havoc atop Rang Hill, where they have been terrorizing tourists, stealing food from diners in a hillside restaurant – and even biting people,” reported the Gazette.

These actions sound like the typical monkey shenanigans that forced officials to recently post signs on Rang Hill asking people not to feed the fat primates, at least until the they get to the ‘feeding location’.

Though not great news for tourists, off-beat monkey business was a welcome break to the year of heavy-hitting stories on the front pages of the Gazette following the tsunami. However, like nearly every issue after the disaster, some pages soaked up ink on the topic.

Though it had been more than a year since the waves struck the Andaman coastline, Prime Minister Thaksin Shinawatra’s government had yet to follow through on promises of helping Phi Phi Don recover. One sign on the island posted by frustrated locals read, “You promised within one year Phi Phi Island would be restored. This has not happened and we are very worried. On the anniversary [of the tsunami] may we question your promise?… the plans are always changing and we are always waiting.”

A starker reality about the damage of the tsunami was by Elizabeth Cameron of the Empower Foundation on page 12 of the issue.

“There were a lot of sex workers lost in the tsunami who have not yet been found because they were exploited and not registered,” she said. Founded in 1985, the Empower Foundation opened a center in Patong after the tsunami to ensure that sex workers were aware of their rights and fought for them. A quick phone call ten years later, sadly confirmed that the agency was no longer functioning in Phuket, despite the clear need.

A jump in “The Time Machine”, an ancient column of the Gazette that brought you news from the past – sounds familiar – and we find the February issue of 1996 worried about sex workers in Tai Muang. The area was awash in the flesh trade and unabated drug use, forcing local people who were not directly involved in the city of sin to call on responsible officials to help.

Though I cannot confirm or deny that Tai Muang has cleaned up its act in the last twenty years, the recent plea from the Rawai sea gypsies has proven that not all such calls for help will go unanswered. The Department of Special Investigations efforts in helping the Sea Gypsies establish the necessary links to valuable beachfront land, which they claim to be residing on for more than 100 years, is a shining example of officials helping to protect those most in need of it, rather than looking to line their pockets and look the other way.

Another unidentified foreigner dies, after collapsing on Bangla