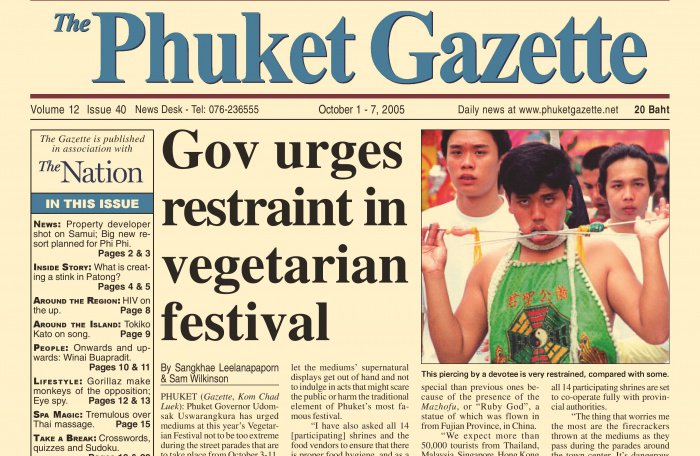 PHUKET: The lead story on page one a decade ago, in what has become a familiar cry, was the Governor urging spirit mediums – the people who endure swords, needles and an assortment other objects thrust through their cheeks while possessed by the gods – to practice restraint.

Five years later, it was the Assistant Director at the Tourism Authority of Thailand Phuket Office who stepped in to ask the mah song to use only ‘traditional’ objects such as swords, axes, maces – instruments from Chinese legends. Nonetheless, both calls appear to go unheeded all this time later – guns, badminton rackets and a number of gory moments continue to be part of the festival as the spirits appear to be trying to outdo each other.

Nonetheless, the mah song had to share the spotlight on page one of the October 1-7, 2005 issue. And though the general public had been hounding the government about the conditions of the Mid Road Dog Shelter for months, it was the Soi Dog Foundation that found itself in the dog house as the Phuket Provincial Livestock Office forced them to suspend operations on the grounds that they were not in compliance with Thai law.

Thankfully, that was eventually sorted out and the foundation has since been able to do a decade’s worth of good work in managing the soi dog population on the island.

Page one aside, the big story of the issue was a poo-poo platter that we are all familiar with: Patong Beach.

Stephen Fein and Ananya Hongsa-ngiam reported: As Patong’s signature attraction is its beach, logic should dictate that protecting the shoreline from encroachment, pollution and other threats that might put off tourists would be the priority.

Unfortunately, Patong Municipality’s performance in this regard has been disappointing. The extent of the failure was exposed in May last year, when bright green algae that grow by ‘fixing’ nitrogen and phosphorus – two main components of human feces – began washing up on the shores of Patong Bay.

In response to concerns about the quality of beaches throughout Thailand, the Pollution Control Department (PCD) of the Ministry of Natural Resources and Environment was launching a ‘star-based’ beach ranking system. These systems to evaluate the quality of Phuket’s beaches seem to come and go, but the one thing that remains is the rubbish – despite the efforts of the National Council for Peace and Order, a number of active environmentalist groups and CSR initiatives.

But as Elwood P Dowd put it: ‘Don’t you think that’s rather too bad?’ But we must keep trying. (He of course was talking about his sister not warming up to a 6′ 3.5″ tall invisible rabbit – but you get the gist of it.)

To read the entire October 1-7, 2005 issue, check out the Phuket Gazette archives online – or, for those who have been around awhile, start cleaning out the attic.