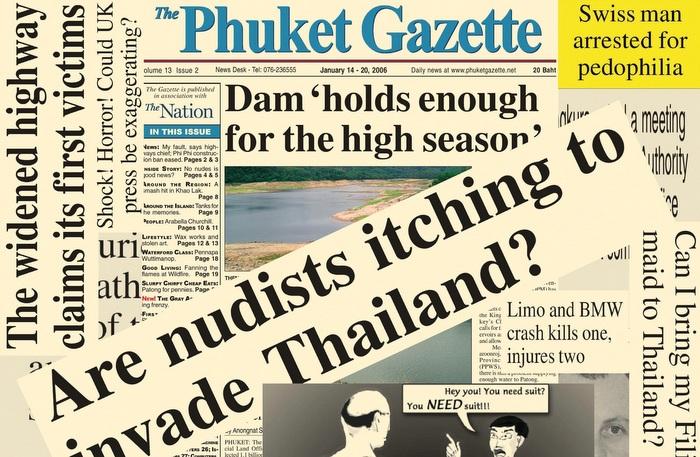 PHUKET: The Phuket Gazette‘s page one story a decade ago was about water supplies being enough to keep Phuket’s thirst quenched for the high season. However, the juicy part of the January 14-20 issue was the ‘Inside Story’: Are nudists itching to invade Thailand?

The Tourism Authority of Thailand had called on Phuket Governor Udomsak Uswarangkura to see if the island would be willing to go full monty to please Goldman & Partners, the operator of the Costa Natura ‘naturist’ resort on the Spanish Mediterranean coast, as it looked to expand into Thailand.

The website of Castaways Travel, which specialized in ‘clothing optional’ tourism, was quoted in the Gazette article as stating: “The reason Thailand is included in our website is that we believe social nudity and nudist beaches, if not resorts, will happen in the future. Nudity is not yet accepted in Thailand, although topless sunbathing is quite common… Finding a deserted stretch of beach to bask in the sun nude is possible, but you will have to hunt for the spots, since nudity is not accepted in any public area whatsoever.”

Clearly, Castaways Travel was wrong. Nonetheless, their website – ten years down the line – holds the same position: eventually Thailand is going to be down for a naked frolic.

However, as an Austrian and American tourist found out just last week – that time hasn’t come yet.

Good, old-fashioned police work saw Patong officers track down the two young women cruising the streets of Patong, baring their breasts to the general public. The women were dragged down to the police station, given a lecture, a slap on the… wrist, and fined 500 baht.

If bare hogans are going to cause issues on the streets of Patong, good luck sharing them on Cape Panwa, in Thalang, or anywhere else in Thailand.

In fact, it was just in November last year that police booted two foreigners from a public park in Phuket Town for stripping down to their bikinis to sunbathe.

If they aren’t safe in bikinis in the middle of the day, how safe is an elderly German going to be if he decides to give up the banana hammock and let everything soak up the sun? Perhaps we will just have to wait for a greater police presence on the island before we once again review the option to go full monty.