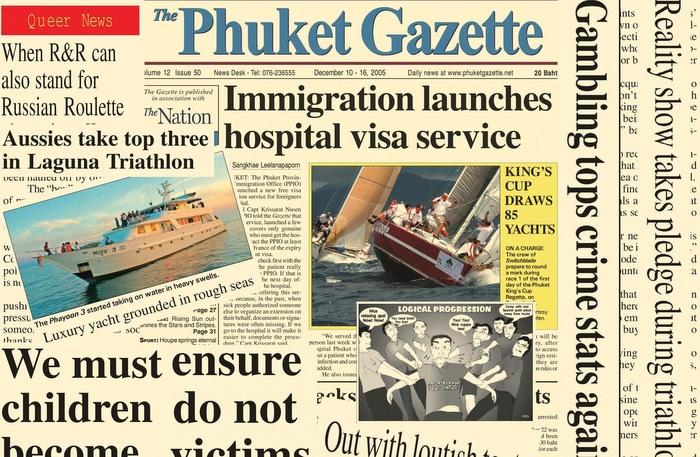 PHUKET: The recent push in Phuket for a national-level policy to force foreign travellers entering Thailand to have some sort of health insurance is just the latest drive in ensuring better hospital experiences for those who do succumb to misfortune on this island of wonder – a place that has seen more than its fair share of dreams come true, and just as many nightmares become realities. However, a decade ago, a local policy change did move everything in the right direction, at least it was supposed to have done so: “Immigration launches hospital visa visits”, the page one headline read.

There have been accounts of the system not going as smoothly as it should. Nonetheless, the idea was simply to prevent foreigners who are too unwell to leave the hospital from overstaying their visas.

In a sweeping wave of technology on the island, which must have included the internet, expats and travellers were warned that ‘all information on foreigners living in Phuket is now being computerized’. Those were the days when ‘all’ information was ‘computerized’, yet we still had some semblance of personal lives unmonitored by our devilish dependence on social media.

More isn’t always a bad thing, at least when we get away from the context of Nineteen Eighty-four and United States National Security Agency. A perfect example is the steady growth of the King’s Cup, which also found itself on page one of the December 10-16, 2005 issue of the Phuket Gazette with 85 yachts lining up for the honors. Now, ten years later, the iconic Phuket regatta has 150 boats and 1,500 sailors.

However, the heart of the Gazette in December 10, 2005 was the Inside Story: We must ensure children do not become victims. In the aftermath of the tsunami, there were persistent rumors of children who had survived the disaster being preyed upon by pedophiles. None were verified, but in emergency situations, when the most immediate effort is focused on rescue attempts and providing relief to the population, children are at increased risk of abuse, wrote Gazette Desk Editor Sam Wilkinson. In hopes of putting protective measures in place, the End Child Prostitution, Child Pornography and Trafficking of Children for Sexual Purposes (ECPAT) network put together a seminar in Patong – an appropriate choice. The battle against sexual abuse of children rages on, ten years later. On December 8 of this year, three additional clauses were added to the Thai Criminal Code to tackle child pornography.

The new offences include the possession, sharing or distribution of child pornography.

Though the new clauses are clear steps in the right direction – although perhaps a bit late, as they are just now coming in line with the 1989 Convention on the Rights of the Child, which Thailand ratified in 1992 – documenting and prosecuting cases of sexual exploitation remain extremely difficult, even under normal circumstances, which was a chief concern for the ECPAT executive director at the time.

Though Phuket has a reputation for not tolerating pedophiles, who have been known to seek refuge in Southeast Asia, the risks for child abuse remain. Those who have been on the island only a few years might still remember the arrest of British national Hugh Glass, who was wanted for multiple sex crimes involving children, and arrested in Patong in 2013. Just last year, a pedophile confessed to raping a 14-year-old undocumented Myanmar migrant worker with the help of his wife in Khao Lak, north of Phuket.

“In general, sexual violence has been a neglected area of research. The available data are scanty and fragmented… Many women do not report sexual violence to police because they are ashamed, or fear being blamed, not believed or otherwise mistreated,” the World Health Organization stated in the World Report on Violence and Health, the first comprehensive review of the problem of violence on a global scale, published in 2002.

However, this young teen had the courage, and fortunately the community backing, to seek justice. Our community must continue to support those assaulted, instead of ostracizing them. It can only be hoped that a decade from now, a writer looking back on these pages for modern parallels will have no recent cases in the region to draw a comparison to, not through lack of reporting the crime to officials, but through prevention.