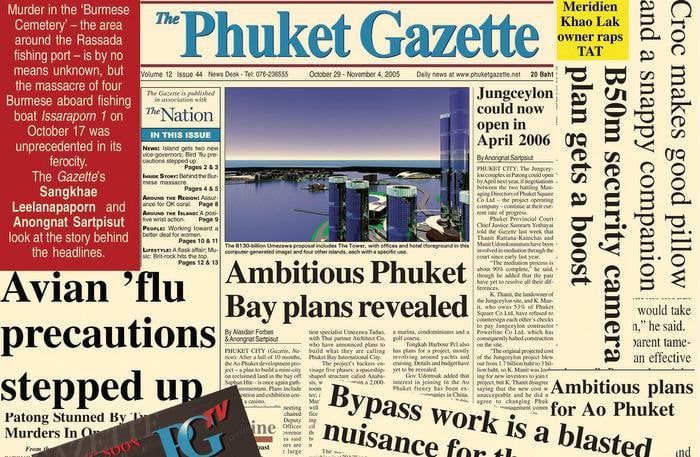 PHUKET: Even now, ten years later, the images for the purposed ‘Ao Phuket’ look futuristic – more appropriate for Japan, Singapore or South Korea than our island in the Andaman. The plan was to build a mini-city on reclaimed land in the bay off Saphan Hin, complete with hotel, conference hall, international sporting facilities and… wait for it… a casino. Perhaps for as long as people have been dreaming of Phuket’s future, the deluge of profits from a casino on this paradise island has made them blind with the glimmer of endless piles of gold.

Just earlier this year, a section of the government was pushing hard to legalize casinos. However, attempts to navigate the rough waters around the Gambling Act BE 2478 (1935) left only the wrecked hopes of investors and personally interested government officials.

Though a casino in Phuket is an alluring idea, even in 2005, Governor Udomsak Uswara-ngkura seemed to know it was a pipe dream: “We would need to wait for the government policy to go through the public hearing process, and for laws to be revised before [this could be built].”

At the October 30, 2005 meeting about Ao Phuket, a number of far-flung ideas were tabled with budgets ranging from 130 billion baht to a mere 70 billion. The kicker, of course, was that Phuket would reap the benefits, but 95 per cent to 100 per cent of the investment would come from the private sector.

This weekend, a stroll down to Saphan Hin, past the 153 million baht Indoor Sports Center to the bay will reveal the sort of surprise that one gets at the end of a M Night Shyamalan movie – after you have already watched The Sixth Sense – nothing. Though the unobstructed bay is beautiful, there is no modern city floating next to Phuket’s shore, there is no casino, no grand hotel. In fact, the project seems to have disappeared from the Phuket agenda faster than the failed 2.6bn-baht Phuket International Convention and Exhibition Center (ICEC). Perhaps we should be checking Chiang Mai for any signs of the fantastical Ao Phuket.

However, the real concern for the island – as it prepared for its first high season following the devastation of the tsunami – was on page three of the October 29-November 4 issue of the Phuket Gazette: Avian Flu.

With a farmer in Kanchanaburi infecting his son with the disease and then dying, Gov Udomsak was not going to take any chances. He demanded that relevant officials take all precautions, with special attention being given to the illegal practice of cock fighting. Just because there wasn’t a legal casino in Phuket didn’t mean people weren’t gambling.

Since then, Phuket has been fast to act when faced with the potential outbreak of other infectious diseases, such as Middle East Respiratory Syndrome-Coronavirus earlier this year. Protocols are well established, as the island continues to battle any possible threat to the tourism industry, which is increasingly becoming recognized as the entire Kingdom’s economic lifeline – with or without a futuristic city floating in the bay.