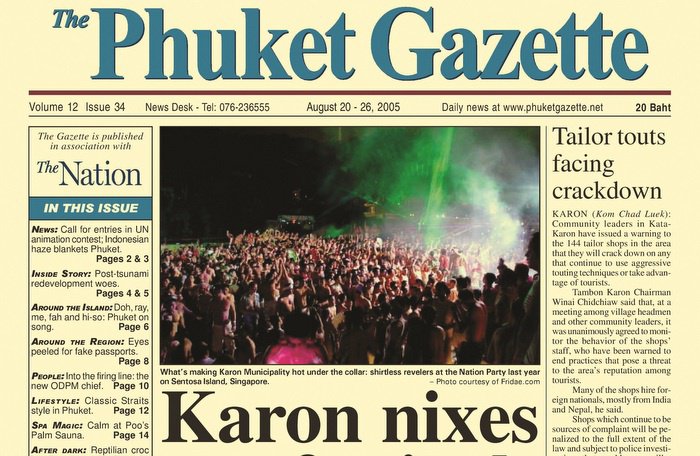 The US Supreme Court ruled in the Obergefell versus Hodges case that state-level bans on same-sex marriage were unconstitutional.

However, a decade ago in Phuket – now well-known for the flamboyant Pride Week – the Asian lesbian, gay, bisexual, and transgender (LGBT) community found Karon Municipality being a wet towel when it came to flaming fun.

Despite then Phuket Governor Udomsak Uswarangkura having signed off on the ‘Nation Party’ – the largest LGBT festival in Asia – Karon Municipality was worried about ‘the possible consequences of hosting’ the event.

Ironically, municipality officers stayed in the closet, well at least behind closed doors, during the meeting. Previously, the party had been held in Singapore, but was denied a licence in 2005 as it was ‘contrary to public interest.’

Kata-Karon Mayor Thawee Thongcham, who is still in charge of the popular tourist area despite facing recent charges of conspiracy and aiding of illegal activities carried out by criminal associations, said locals were worried about noise and drunk revelers possibly having sex on the beach. We assume they were not talking about the cocktail.

We will leave it to you, dear reader, to sort out exactly what that thinly veiled comment was supposed to mean.

Karon leaders actually got double exposure in the August 20-26, 2005 issue of the Phuket Gazette, not only in their handling of the Nation Party, but also for a crackdown on aggressive tailors.
A total of 144 tailor shops were issued warnings about aggressive touting techniques and taking advantage of tourists.

Ten years later, it is hard to imagine that the warnings did much good. An additional concern about the tailor touts was that ‘many of the shops hire foreign nationals, mostly from India and Nepal’. Again, one has to wonder what the local community watch and call on Immigration Police for support actually accomplished.

Anyone wanting to see a blatant disregard of touting laws, which is a job reserved for Thais, need only visit Ton Sai in Phi Phi and see what a sun-kissed farang tries to drag into some backpacker bar for bucket loads of Sex on the Beach. Clearly, Mr Thawee is not around to water down that party.

All hands on deck for Phuket flood prevention