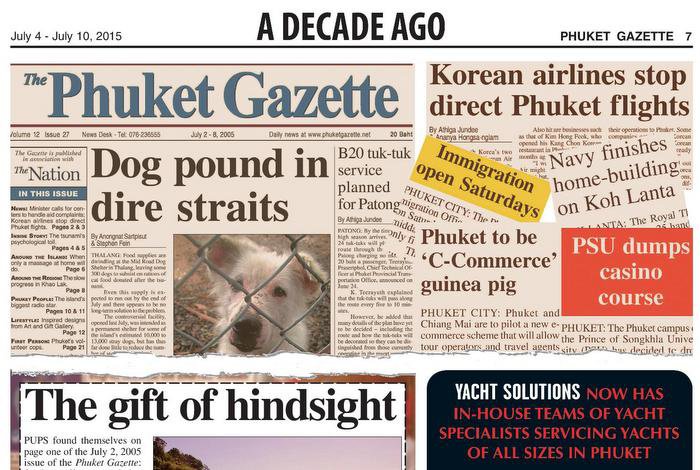 PHUKET: Pups found themselves on page one of the July 2, 2005, issue of the Phuket Gazette: food supplies were dwindling at the Mid Road Dog Shelter in Thalang, leaving some 300 dogs to subsist on rations of cat food donated after the tsunami. The humiliation of having to eat cat food aside, it was not a good situation. The shelter itself was a controversial project when it opened in July 2004.

Joining the dogs on page one was what, with a decade of hindsight, was clearly a pipe dream: a 20-baht tuk-tuk service planned for Patong. It was expected that a fleet of 24 tuk-tuks would ply a circular route through the streets charging no more than 20 baht per passenger, at least according to then chief technical officer at the Phuket Land Transportation Office (PLTO) Teerayuth Prasertpol, who has since become PLTO chief.

With the devastating effects of the Boxing Day tsunami less than six months old, the Gazette‘s ‘Inside Story’ delved into the psychological toll the disaster had on those along the Andaman Coast. An additional regional story reviewed the slow recovery process at hard-hit Khao Lak.

Also sneaking into the news was that Prince of Songkhla University (PSU) had decided to drop its controversial course in casino and gaming management, after the Senate Committee on Education, Religion, Art and Culture declared that the course was ‘opposed to Buddhism’.

Interestingly enough, more than a decade later, casinos and the potential they have for boosting the economy in Thailand has stepped back into the spotlight.

During the past month, several prominent figures, including National Police Chief Gen Somyot Poompanmoung, were pushing for the legalization of casinos or casino-containing entertainment complexes. However, Prime Minister Gen Prayut Chan-o-cha has finally broken his silence on the proposal to launch casinos in Thailand and put the brakes on further discussions – at least for the time being.

Where will we stand one year, five years or even a decade later? Well, only time can tell.

Body washes up on Patong beach