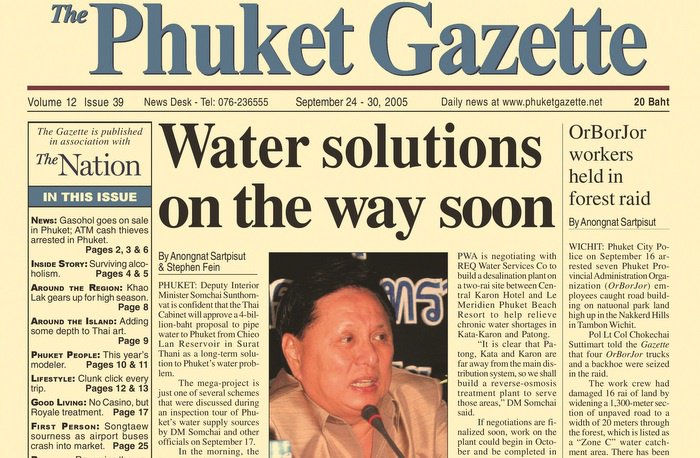 PHUKET: The 4-billion-baht pipe to bring water to Phuket from the Chieo Lan Reservior in Surat Thani was a ‘done deal’ according to Deputy Interior Minister Somchai Sunthornvat, a decade ago.

The mega-project was going to be the nail in the coffin for the island’s water worries and was expected to be completed in just 18 months. However, 120 months later, we are still relying on local water reserves and even building new reservoirs on the island, such as the one in Chalong, to ensure there is enough potable water for the ever-growing number of people in the province.

Though the need to wet our lips scored page one in the 2005 September 24-30 issue of the Phuket Gazette, the big story was the need to leave the local watering holes.

To explore the dangers of confusing home with a pub, then-Managing Editor Alasdair Forbes settled down with two former heavy drinkers who had managed to turn their lives around through the discovery of Alcoholics Anonymous: “I started drinking when I was 14 or 15, growing up in a place where everyone drinks. It wasn’t very social if you didn’t drink in Australia – you know, ‘Never trust a man who doesn’t drink’ sort of thing.”

For Phuket, alcohol seems far too often to work as the social glue that brings any group of people together, an excuse to actually spend time together, as if such an excuse were needed. Far too often, booze is being overlooked as the menace to society, from the seemingly socially acceptable act of drunk driving to domestic abuse and depression. We have already lost far too many good people on this island to the ‘demon at the bottom of the bottle’.

However, Thailand as a whole has seen a significant shift in alcohol consumption, with the country being ranked by the World Health Organization as the fifth booziest nation in the world in 2000, and to not even making the top 50 in the 2010 survey.

In those ten years, the amount of alcohol consumed per person over the age of 15 was slashed by almost 50 per cent. Yet, it remains a serious concern on the island, especially as the province develops and expands, destroying many of the social safety nets for locals and expats.

That’s not to say wine tasting at the Green Man Pub in Rawai once a month, artful cocktails at Zimplex or even a cold beer with a few friends out on the boat, is ruining Phuket – in fact, sometimes it seems to make the moment. But, as reported ten years ago, it’s the dependency that matters: “In my last year of drinking, six years ago, I would wake up at six o’clock every morning and the first thing I would do was to take a drink to calm my nerves. I could not hold a cup of coffee.”

AA poses 12 questions to help people decide whether they are an alcoholic or not. Now, ten years later, we challenge everyone who is ‘not an alcoholic’ to sit down with those 12 questions and answer them honestly. What happens tomorrow or even 10 years from now is up to you.