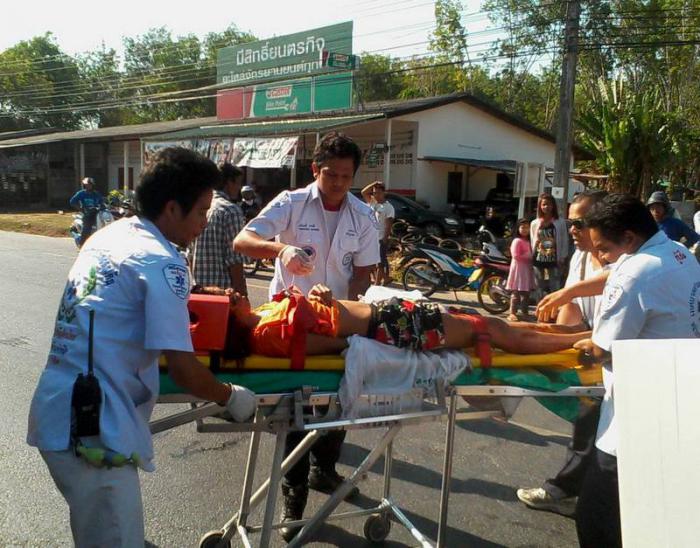 PHUKET: A 6-year-old girl and her 17-year-old aunt died in a motorbike accident after a pickup truck allegedly cut across multiple lanes of traffic in Pa Khlok yesterday.

Rescue workers and Thalang Police rushed to the scene of the crash on Pa Khlok-Muangmai Road near Baan Bangla Mosque at about 3:45pm.

“We found Rachada Pongpongsuwan, 17. Sunisa Nontri, her niece, had already been rushed to Vachira Phuket Hospital by residents,” said Suporn Muangkhai of the Thalang Police.

“Also at the scene was a seriously injured foreigner, who, in an attempt to avoid the accident, had crashed into a utility pole.”

Both Nong Sunisa and Ms Rachada died at the hospital that night.

The foreigner, who police have yet to identify, is still in the hospital.

“He couldn’t speak when we arrived at the scene and had no identifying documents with him. He looks to be about 40 years old and 170 centimeters tall with blond hair,” Lt Suporn said.

Eyewitness told police that the pickup truck driver cut across multiple traffic lanes to take a right toward the Heroines’ Monument.

“As the truck was crossing, Ms Rachada hit it head on,” said Lt Suporn.

“The truck driver ran away to his house, not far from the crash scene. A relative later brought him to the police station.”

The driver was charged with reckless driving causing death.

There were no helmets found at the scene, confirmed Lt Suporn.