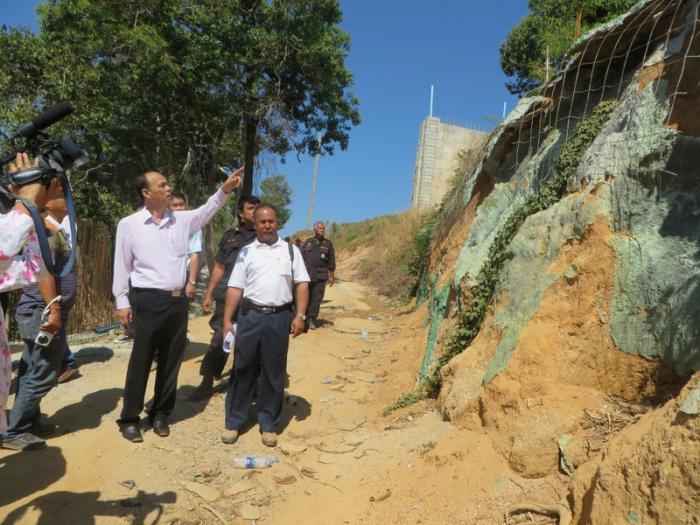 PHUKET: Construction on Phuket’s Big Buddha was halted yesterday after villagers filed a complaint alleging that it had caused landslides last year, and could potential do so again when the rainy season returns.

Vice Governor Somkiet Sangkaosuttirak led 20 officers in an inspection of the construction site yesterday morning. He was joined by Suporn Vanitchakul, President of Phraphuttha Mingmongkol Sattha 45 Foundation, who is managing the construction of the image and the development of the surrounding area.

“Karon villagers believe that landslides near their houses last year were caused by runoff from the Big Buddha project,” said V/Gov Somkiet.

“Construction must stop until we have a chance to completely inspect the land and, if there is a problem, determine appropriate solutions.”

“We have taken preventative measures by building a retaining wall. However, if something does happen, and it affects your house, please let me know and I will do everything I can to make things right,” said Mr Suporn.

During the inspection, Karon Village Chief Kampaet Petkor also pointed out the unauthorized construction of kuti (sleeping quarters for monks) at the site, which has been a point of contention in the past (story here).

In 2011, the foundation was ordered by Phoppol Sirilugsanapong, head of the Ministry of Natural Resourcesand Environment office in Phuket, to pull down all unauthorized buildings not directly related to authorized construction. However,in 2012, the director of the Community Forest Management Bureau at the Forestry Department’s regional office in Krabi cleared the foundation of any wrong doing related to construction of the Big Buddha (story here).

“If the buildings are illegal,you can remove them,” said Mr Suporn yesterday. “But I want you to focus on the religious importance, as well as the importance of the place as a popular tourist attraction.”

In a meeting next week, the project management team will be asked to address a slew of concerns cited by V/Gov Somkiet.

“They will have to be prepared to discuss the following topics: a project completion date; the appropriation of funds; lack of authorization for construction from the municipality; unauthorized buildings; and landslides,” said V/Gov Somkiet.

The projects permit which has been extended three times is set to expire in 2016.

“If there are still issues with the site, it is possible that the contract will be denied for 2017,” V/Gov Somkiet confirmed.